Russ has worked at Keltruck since October 1987 and is one of the longest, continuously serving members of staff. He joined the company on a YTS Scheme and attended Sandwell College for block release training. Following a period working on service reception, Russ was promoted to Workshop Reception Manager taking responsibility for both workshop and reception areas.

In April 1994 Russ was appointed Service Reception & Workshop Manager and also attended Scania Business School and passed the courses after several years of study. In January 1997 Russ took on responsibility for the Cheltenham and Droitwich branches. In July 1997 Russ’s role changed to Account Manager whilst still maintaining responsibility for Cheltenham & Droitwich.

Following the arrival of John Biggin at Keltruck, Russ came back to the West Bromwich branch as General Manager and in January 2003, he also took on responsibility for the Esso Vehicle Maintenance Unit.

In June 2007 Russ was appointed RGM for the Newark, West Bromwich and Willenhall branches and Kingswinford VMU. In January 2009 Russ also assumed responsibility for the Burton on Trent, Sutton-in-Ashfield and Worksop branches as well as the Specialist Services Division as RGM.

In September 2009 Russ was promoted to Aftersales Director.

Russ is married to Julie with whom he has an adult son, Louis, who also works at Keltruck. 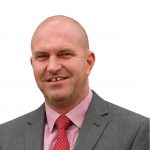