Keltruck, the largest independent Scania Distributor in Europe, has sold a R580 Topline V8 Scania to Simkins Transport Limited, based in Sutton Coldfield, West Midlands. The deal was completed by Russell Barnes, Keltruck’s Used Sales Executive based at Keltruck Newark.

Once the deal was completed in December 2018, Russell introduced James Simkins of Simkins Transport to Keltruck’s Newark branch manager Phil Haywood, to discuss transforming his used vehicle to suit his requirements. James had some initial ideas, which Phil and his team adapted, and added further suggestions.

James Simkins said, “I’m very happy with what has been done with this vehicle: the paint shop has done a great job and Russell and the Keltruck Newark team have helped me to design my perfect truck.”

Keltruck provides an extensive range of painting facilities in its state-of-the-art USI Italia and Dalby spray and bake booths at both its Newark and West Bromwich sites. All types of vehicles can be painted, including trailer and vehicle components, such as grilles and doors. As well as painting, the paintshop can provide shot blasting, vehicle decaling, sign writing and vehicle wrapping.

“I am over the moon with the personal touches I received with my vehicle handover, having driven through the gate to see my vehicle centre stage,” added James. “Having Russell as a point of contact has put me at ease – as he was previously a driver he knows what to recommend and I trusted him throughout the whole process.”

After being shown pictures of another vehicle completed by Keltruck, Simkins Transport chose VW Tornado Red for the vehicle, with black and urban grey detailing. Keltruck then prepared and painted the vehicle to the colour specification and fitted light bars. James was also a winner in the ‘Twelve deals of Christmas’ offer that took place on Keltruck’s Facebook page in December where he won the free alloys for this vehicle which was the icing on the cake for him.

“The finishing touch was a full catwalk, which was ordered unpainted, but the plan was to paint it black,” said Russell. “Once it was fitted, we thought urban grey would be a better choice, so a quick phone call to the customer and it was agreed. Even though it cost 30% more to paint than black, we decided to absorb the extra cost so it would look right for the customer.”

Phil Haywood said, “This is by far the best vehicle we have ever transformed here at Newark, and it was presented to the customer better than some brand new vehicles.” 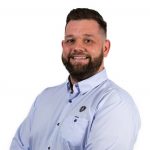