Founded almost 90 years ago, Fagan & Whalley is a family run business which is proud of its Lancashire roots and Padiham base. From humble beginnings the firm has developed into one of the North West’s premier fleets, with 150 tractor units and 20 rigids, almost exclusively Scania, to its name. 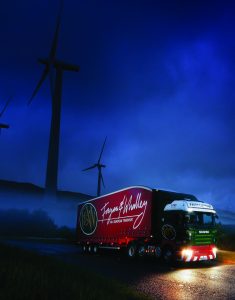 “It’s true to say that to a large extent we built our business on the Scania brand,” says the company’s Commercial Director, Stephen Fagan. “Back in the days of the Scania 3-series, it made good financial sense for us to buy used Scanias, refurbish them and then run them for several years. That’s because when the time came to part with them, the residuals were so good we’d get our money back.

“The complexity of modern vehicles means that wouldn’t work now, so those days are behind us. Instead, we buy new trucks and look to keep them for six years on average. We’ve stuck with Scania because they represent such good value for money. We feel we get a lot better reliability from them, and therefore less downtime. We spend less on parts and service and our two key dealers, Preston Scania and Keltruck, which looks after our Coventry based fleet, do a really great job for us.”

Despite all of this, the Scania 3-series is far from forgotten at Fagan & Whalley: “That’s right, they’re part of our history,” says Stephen Fagan. “So we’ve saved one for posterity. Our apprentices built it up out of three old vehicles and we then ran it for a while before using it as a shunter. Now it’s parked up waiting to be refurbished and preserved – we won’t be letting that one go in a hurry!”