For consultation on roadworks read fudge 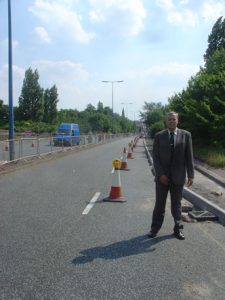 Dear Editor, – The dire state of our transport network has quite rightly played a prominent part in The Post in the past, not least with your Get Moving campaign.

Also, many of the great and the good have tried hard to get us moving – including, on the national stage, our own Sir Digby Jones, who many times on Radio 4 and the like has described just what it is like trying to run a business in this area, competing in a increasingly competitive world market.

So I was not at all surprised to get a call from my managing director recently saying: “You won’t believe what they are doing to the dual carriageway” (almost outside our head offices, very near to junction 1 of the M5 motorway), “they are reducing it down to a single lane, and creating what looks like a bigger bicycle lane and larger footpath.”

This was without any form of consultation or communication of course from Sandwell Council.

Birmingham Chamber’s Jerry Blackett worked long and hard starting the West Midlands Business Transport Group, formed to speak with one united business voice on the subject of transport in the region.

During this time Jerry sealed an agreement with Tom McGrath, an honourable man heading what is called CEPOG, a group that represents all of our regional highways engineers.

Tom agreed that there would be “full and meaningful consultation” on all such matters. But once again Tom has been let down, as has happened many times in the past by a certain element in this group.

This is why most business folk just simply do not believe any more when government – local or national – talks about “consultation”. Like me, they know that to be a fudge.

We simply cannot go on for very much longer seeing our already inadequate road infrastructure being medled with by these evidently “holier than though” types, who are “engineering” in more and more hold-ups often for some spurious or debatable “safety reason” and in doing so conflicting with the world’s global warming objectives and emission targets.

Someone must stop them interfering with our only practical means of transport – whilst we still have at least some manufacturing left.