Winfield Transport of Burdock Close, Cannock, have chosen Keltruck Ltd to add a new Scania vehicle to their fleet. 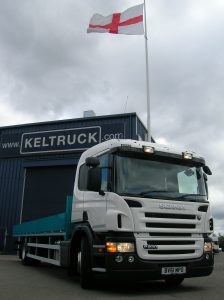 The deal was made between Martyn Hill, New Sales Account Manager of Keltruck and Warren Winfield, Director of Winfield’s.

The vehicle delivered is a Scania P235DB4X2MNA and was purchased as a new addition to their fleet. You will see this vehicle on the road 1st September!

The new vehicle is to cope with increased work from existing customers and will be used to transport boiler tubes, heavy duty electrical control panels and metal fabrications.

The vehicles will be maintained at Keltruck’s Willenhall branch.

When asked why he chose the specific model of truck, Warren commented that it was down to the, “vehicle availability, build standard, residual value, and attention to detail in drivers controls and equipment.”

Warren continued, “We have worked with Keltruck before and have always enjoyed good service from them.” Following a healthy increase of demand from their customers, Warren said, “we have made a decision to return the fleet to Scania.”

During 1950s, S Winfield Ltd were originally a coal carrying fleet, running coal to schools and power stations until later becoming established as Winfield Group in 1969.

Their main target today is the engineering and fabricating industries.

Winfield Group established the first driver bonus for safe and fuel efficient driving and in 2005 were awarded a National Training award for their efforts.