Measham based potato and fresh vegetable producer AB Produce plc has continued a long tradition with Keltruck and Scania by once again replacing 6 of its fleet with new Scanias. 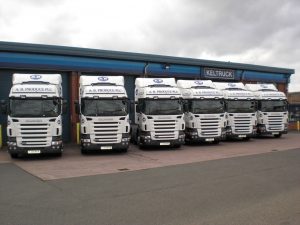 The 6 new Euro 5, non ad blue R440 LA 6×2/4MNA Highlines will be entering service on the 1 December and will be replacing 6 x R420LA 6×2/4 MNA Highlines that have given good service over the last two years and will be for sale through Keltruck’s used sales department from the start of December.

Account Manager Alan Hill commented: “It was a tough job to get the deal with Paul and Andrew from AB Produce this time. The competition came in with some very good prices. Once we had taken into account though, factors such as ad blue cost, Scania’s better fuel economy, reliability, dealer location and service it became clear that Scania was the way to go.”

The vehicles are on a two year R+M deal and will be looked after by Keltruck’s Burton on Trent depot.