No two days are the same working at Keltruck

Keltruck Limited, the largest independent Scania Distributor in Europe, has demonstrated the expertise and flexibility of its technicians by repairing the engine of an unusual Doosan DL550-5 wheel loader. Weighing in at an impressive 31.7 tonnes, the loader is designed for the largest material handling applications, such as in quarries, mines, demolition and industrial operations. 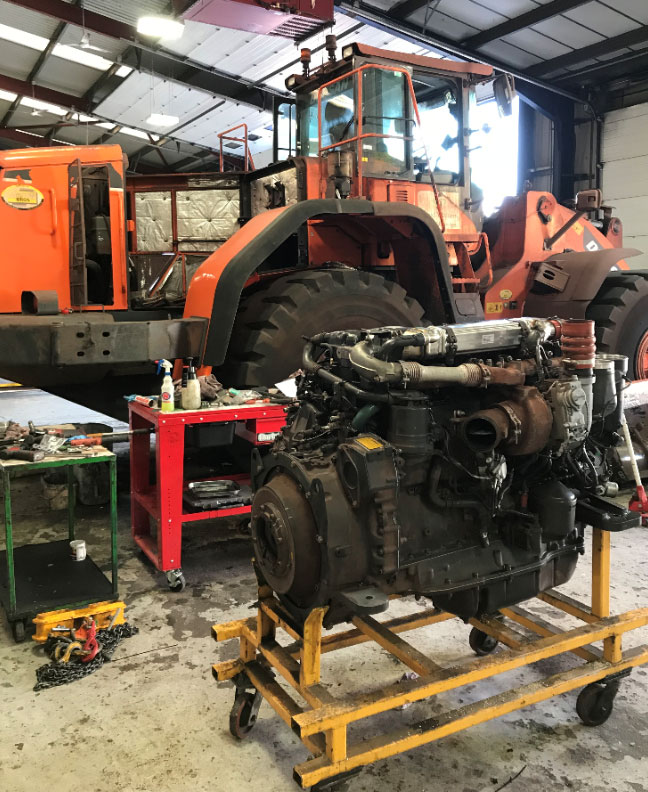 The wheel loader was recovered to Keltruck’s branch in Droitwich from Port Talbot steel works in South Wales, where Keltruck’s technicians were able to identify and fix the fault. This required the lift-out and complete strip down of the wheel loader’s Scania engine to identify a leak of coolant in the engine oil. As it is a non-standard vehicle, Keltruck had to rent a crane to lift the engine out and to mount it back in.

The investigation and repair work involved numerous hours in the workshop, running multiple tests in conjunction with Doosan dealers Mason Bros and the Scania (Great Britain) Limited technical team. With the engine fixed, the wheel loader is now back in the quarry, doing what it does best.

“With Scania’s product range we don’t just cover trucks, buses and coaches but also Scania’s robust industrial engines, which can be found in use in some of the toughest environments in the world,” said Matthew Pettican, Depot Manager at Keltruck Scania Droitwich. “This job was unusual for my workshop as it was the first of its kind to ever come through the gates here, but my team rose to the challenge. No two days are the same working at Keltruck, which is what keeps it so interesting.”

The DL550-5 has the highest horsepower, tipping capacity and breakout force in the Doosan wheel loader line-up. It has a bucket capacity of 7.46 yd³ and ground clearance of 1′ 6″. Its travel speed in first gear is 3.91mph and its fuel tank holds 116.5 gallons.

Keltruck has 19 locations across the Midlands and Wales. For more information about technician vacancies please visit keltruckscania.com/currentvacancies.