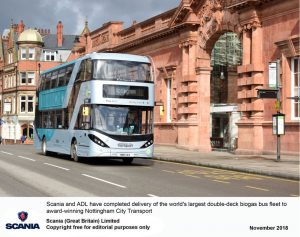 Scania and Alexander Dennis Limited (ADL) have completed the delivery of 53 double-deck biogas-fuelled buses to Nottingham City Transport.  Representing the world’s largest fleet of its type, the 84-passenger-capacity vehicles are now providing daily services on a number of routes in and around the city.  Each bus has a minimum range of 250 miles on a single fill, and contributes significantly to improved air quality through low emissions of nitrous oxides and particulate matter, and reductions of carbon dioxide emissions by up to 84 percent – all factors which have contributed to Nottingham City Transport being named Top City Operator and winner of the Environmental Award at this year’s UK Bus Awards.

“We are delighted at Nottingham’s success at the Awards and congratulate the team wholeheartedly,” comments Martin West, New Bus and Coach Sales Director for Scania (Great Britain) Limited.  “Nottingham is one of pioneers of biogas double-deckers in the UK and is now deservedly reaping the benefits of its foresight and commitment.  The successful introduction of the fleet, backed by an installation of an in-house gas refuelling station, is redefining sustainability and demonstrating a new and exciting model of bus operation.”

Richard Matthews, UK Sales Director for ADL, comments, “We are pleased to have partnered with NCT and Scania on this momentous project. Not only does this fleet deliver the green credentials of biogas, it also provides a premium, passenger-centric specification.  Transparency, trust and mutual respect between all three partners involved has been key in bringing this to life and we are looking forward to continuing to build on this strong foundation in 2019 and beyond.”

Based on Scania’s 280 horsepower N 280 UD4x2 chassis, the Nottingham biogas fleet is equipped with ADL’s Enviro400CBG City body.  The vehicles have an overall length of 11.5-metres, midway between Nottingham’s existing 10.9- and 12-metre buses.  With performance comparable to conventionally-fuelled vehicles and offering high levels of comfort, the fleet has been warmly welcomed by drivers and passengers alike. 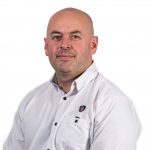