Scania has enjoyed its best ever Euro Bus Expo exhibition, both in terms of orders signed and sealed at the show and with regard to visitor reaction to the news that all vehicles on the company’s stand this year were capable of being powered by renewable fuels.  In addition to a hybrid coach chassis and a Scania Touring coach, the combustion engines of both of which can run on HVO (hydrotreated vegetable oils), the stand featured the 100th biogas double decker bus to be produced by Scania in conjunction with bodybuilder ADL.

“Innovation, sustainability, partnerships and performance are our four key messages today and all were present in abundance on our stand at this year’s show,” comments Martin West, New Bus and Coach Sales Director for Scania (Great Britain) Limited.  “Each vehicle on display attracted a great deal of attention in its own right, but the levels of interest in alternative and renewable fuels demonstrated to us beyond doubt that the industry is now firmly focusing on operating more sustainably in the future.

Among the operators visiting the Scania stand were:

Stafford-based Leons Travel Group was celebrating its order for two Scania Irizar i6S vehicles due for delivery next March.  Featuring 53 seats, full climate control and a centre toilet, both vehicles are 13.2 metres overall length and are based on Scania K 410 EB6x2*4 rear-steer chassis.

“We have a long-standing relationship with Scania and the excellent service we receive from the company’s bus and coach team and West Pennine Trucks, our local Scania dealer, is what keeps us coming back for more,” comments Andy Douglas, Director of Leons Travel Group.  “The vehicles themselves certainly have the ‘wow factor’ and are very much appreciated by our customers and drivers alike.”

Leons Travel Group will be using its new Scania Irizar i6Ss on a full range of coaching operations, including tours and holidays, cruise liner work and general private hire. 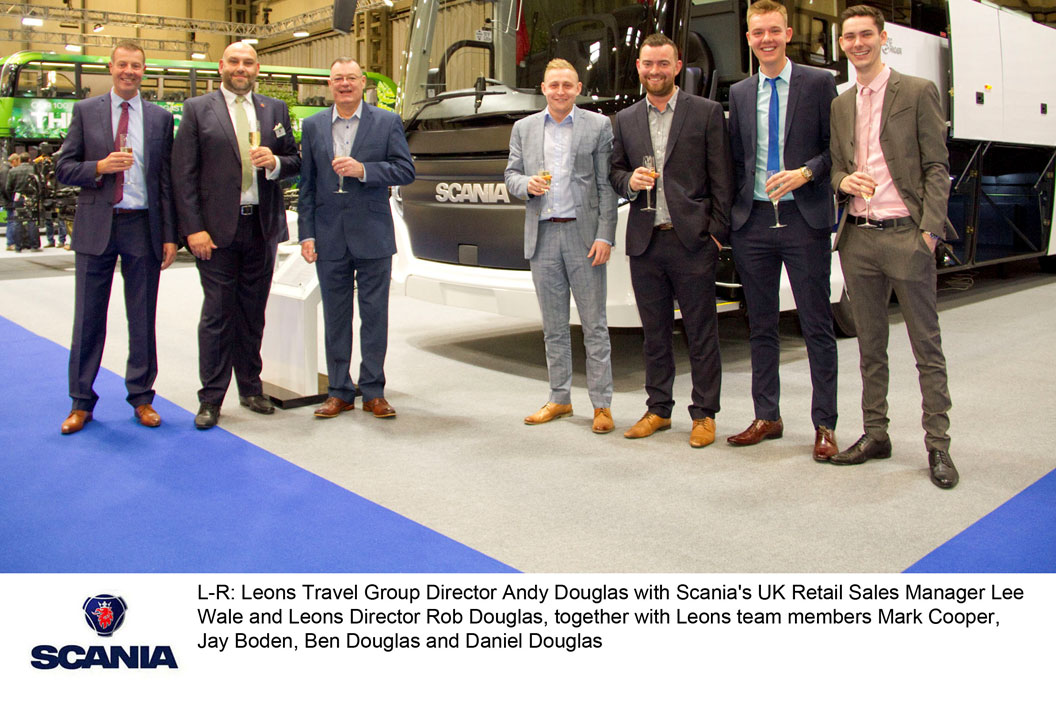 Sealing an order for a triaxle Scania Touring coach based on a Scania K 410 EB 6×2*4 chassis was show visitor Ian Shipley, Operations Director of Birtley, Tyne and Wear-based operator JH Coaches.  The 59 + courier seat vehicle is scheduled for delivery next April when it will start work on one of the company’s key contracts, which involves taking parties of school children to visit the Normandy beaches and battlefields of northern France as part of their curricular activities.

“We have taken delivery of six new Scania coaches since January 2017 and look forward to welcoming the new Touring into the fleet next spring,” says Ian Shipley.  “We are currently in a process of upgrading our entire fleet to Euro 6, and for me Scania offer the best package on the market in terms of product reliability, dealer support and a competitive offer.  We are a long-standing Scania operator and as Operations Director I know they give me a peaceful life – that’s the appeal in a nutshell to me!” 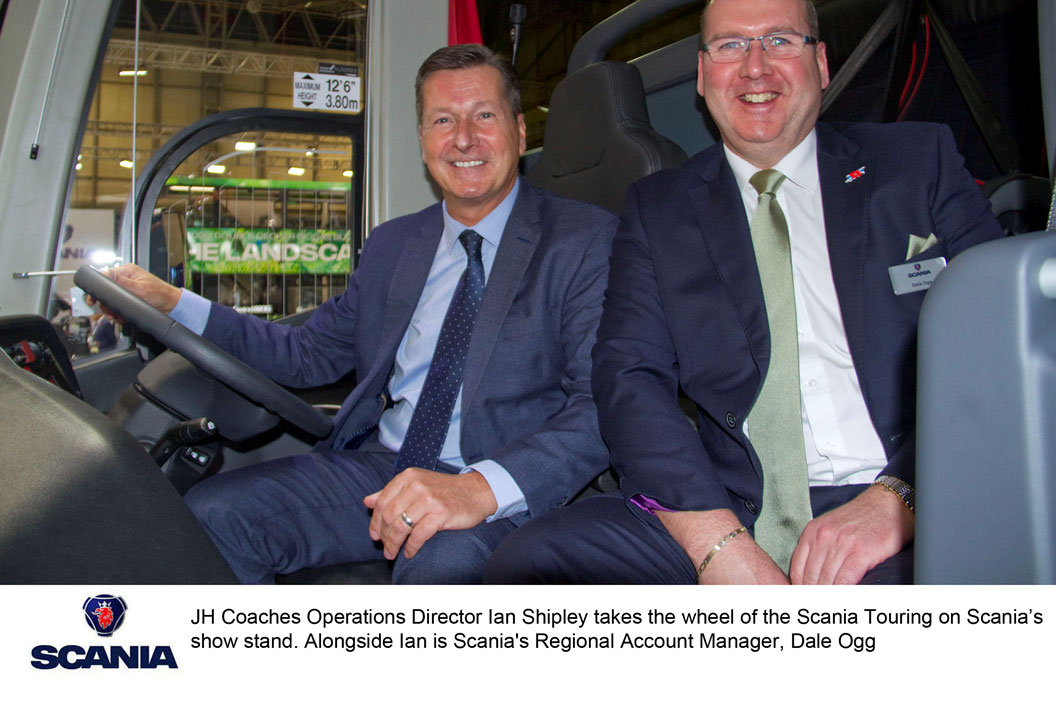 “We took delivery of our first two Scania Irizar i4s earlier this year and their performance and quality convinced us to order a third,” says Richard Meredith.  “For us, backup is especially important and we rely on Scania’s inclusive two year repair and maintenance contract, which we then extend to cover the vehicles’ in-service life with us.  With local dealer Keltruck Droitwich managing our servicing, it’s a formula that works extremely well for us.”

Wrexham-based Unicorn Travel signed an order for its first ever Scania at the Euro Bus Show 2018. Scheduled delivery of their Scania K 360 IB4x2 Touring will be in April 2019, when it will replace one of the 13-plate vehicles on the fleet. The 12.1-metre overall length vehicle has 51 seats, centre toilet, three-point seatbelts, Frenzel drinks machine, Climate Control and Alcoa Dura-Bright alloy wheels .

“We’re really excited to have purchased our first Scania. We chose Scania because it’s a quality product with good dealer back-up. Our local dealer is open 24 hours, five days a week so our maintenance can be done overnight to limited downtime; we’ve extended the standard two year R&M package to three too. We have used Scania Finance to purchase the vehicle, it was great to have everything under one roof,” says Katrina Carroll, Director of Unicorn Travel. 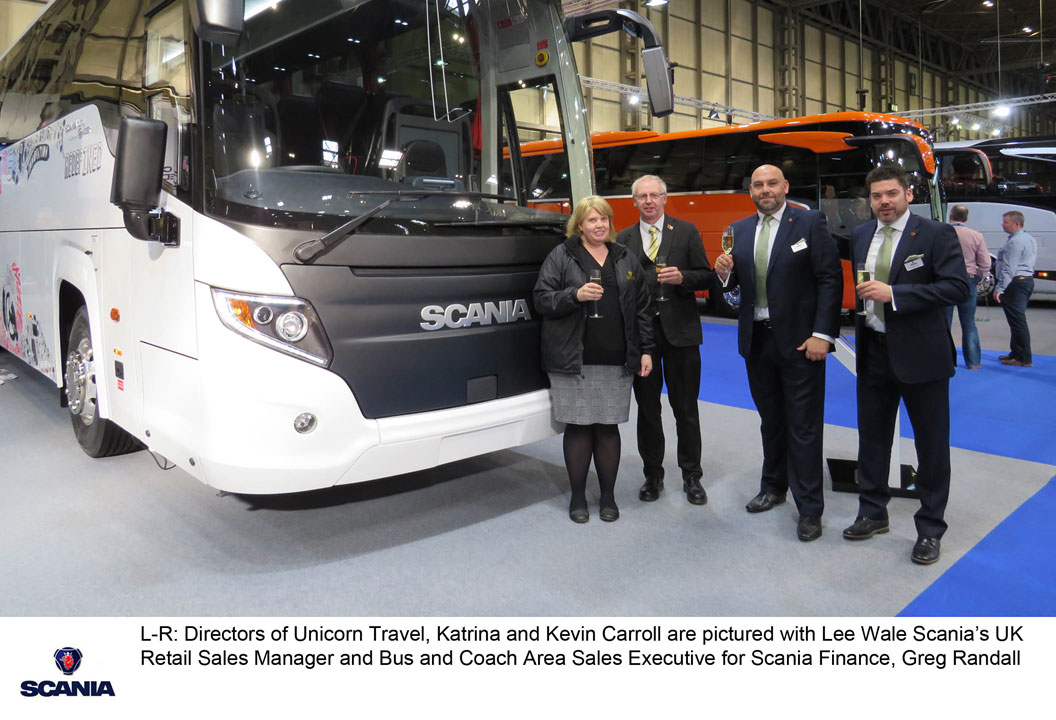 Paul S. Winson Coaches signed an order at the show for a Scania K 410 EB6x2*4 13.22-metre overall length with Irizar i6S bodywork to join its 26 vehicle fleet due to increased business demand. The 53-seater will be the sixth Scania the company has purchased since 2014. Due to be delivered in April 2019, it will be used for general private hire, tour and school work.

Director, Paul Winson Jnr says: “When you buy a Scania, it’s like buying into a family. With us being a family business, that’s important to us. I don’t know how they manage it, but they make it feel personal.”

While at the show, Paul S. Winson was presented with the Lego model of one of its  coaches as a thank you for working closely with Scania in a testimonial campaign throughout 2018, illustrating one of Scania’s key messages, ‘performance redefined’. 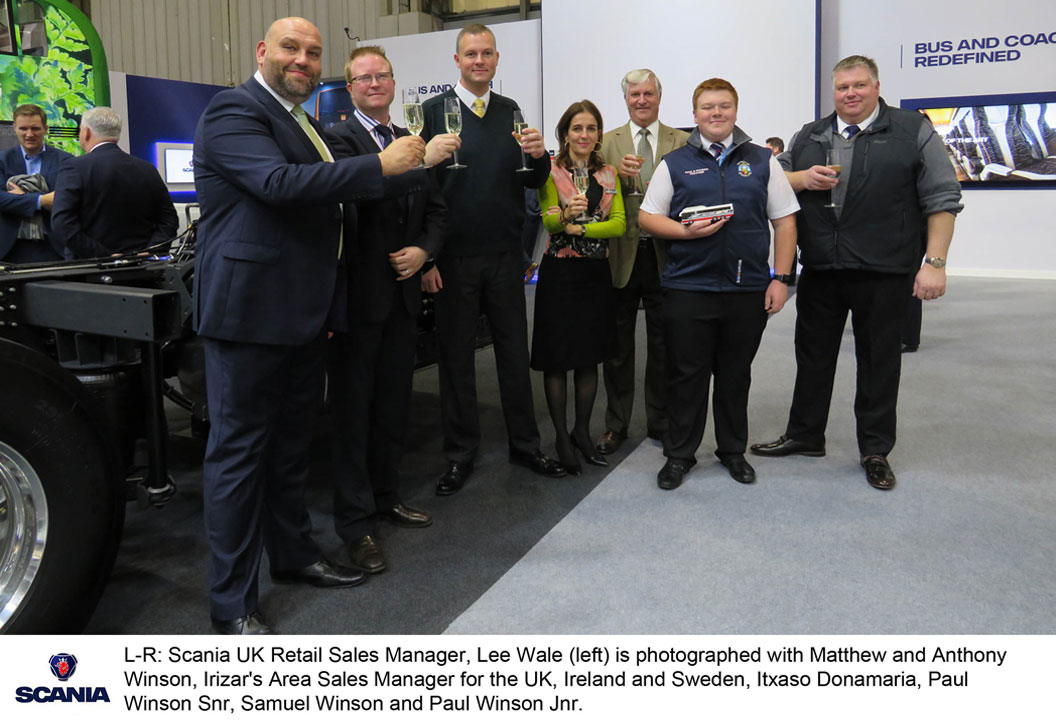 Hertfordshire-based Masons Minibus & Coach Hire Ltd, signed an order for an 80-seater Scania coach at the show. The first new Scania to be purchased by the company will be delivered in April 2019 and will be used for general private hire, excursions and school hire.

Director, James Mason says: “We are responsible for transporting 450 students to and from school every day so we’ve purchased the vehicle to keep up with this demand. We couldn’t find another product that compared in terms of total cost of ownership and of such high quality with the unique seating capacity we wanted.”

Director, Matthew Mason, adds: “We’re extremely excited to see the finished product. Purchasing a new vehicle is always a big decision but we know that the Scania is a good investment.” 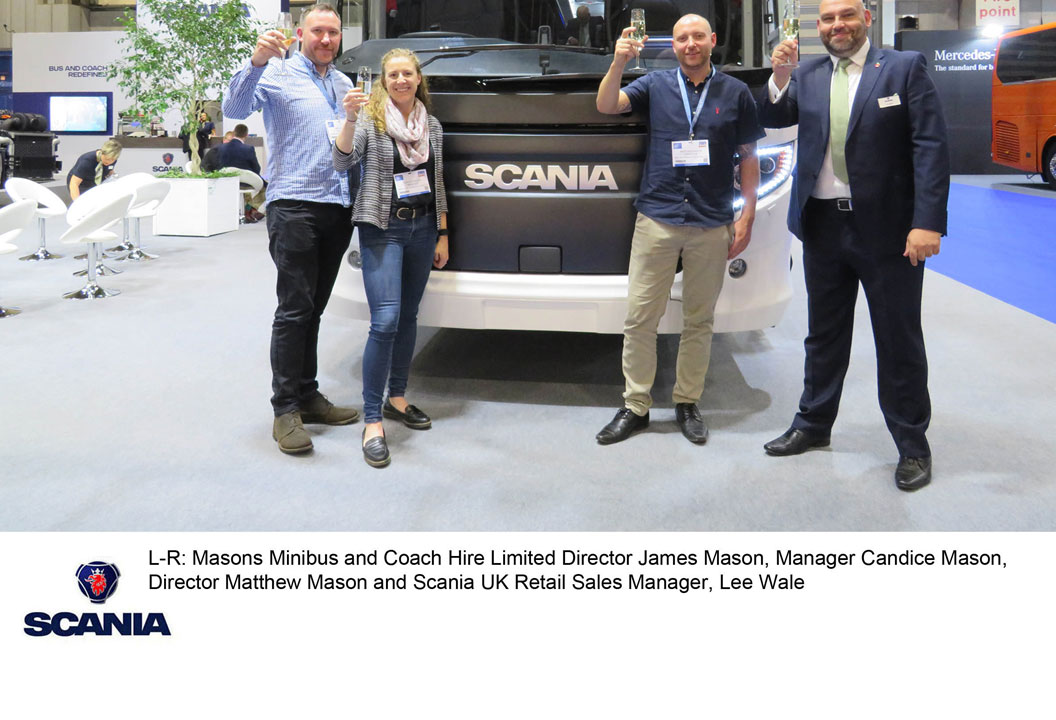 Attain’s David Costello comments, “This is our fourth Scania Touring and we have been extremely happy with the performance of the vehicle.  We have an excellent working relationship with everyone in Scania’s Bus and Coach team, so when we were looking for an additional vehicle we had no hesitation in ordering from them again.” 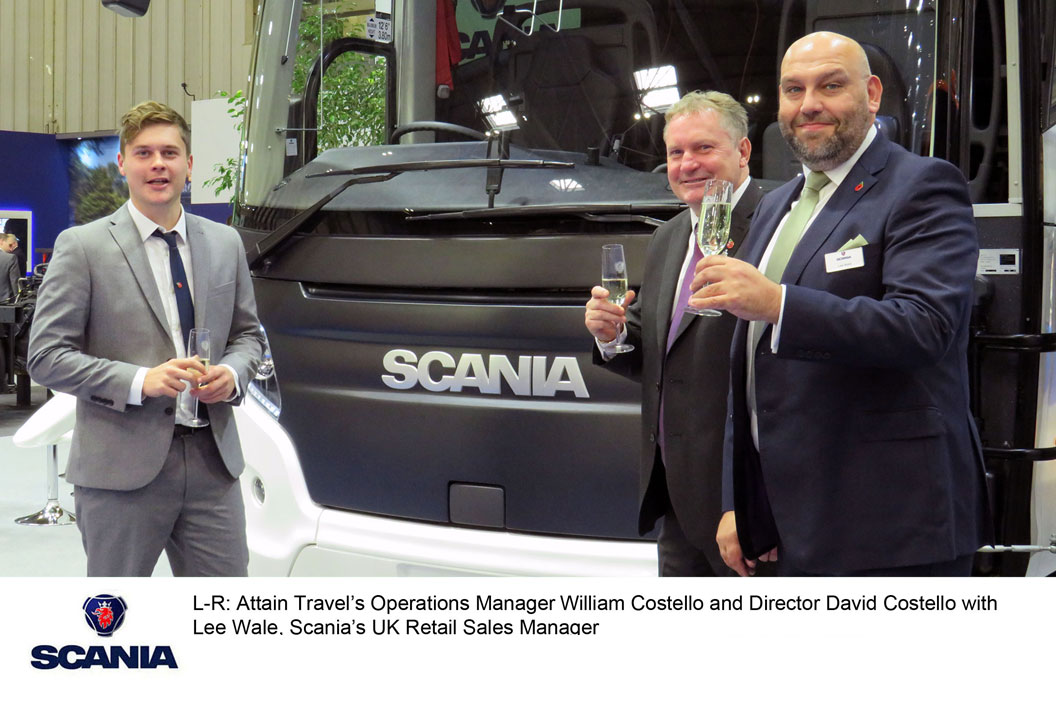