Scania creates the world’s first clock made of trucks

Scania has taken on the toughest challenge of them all – the race against time. In a challenge involving 14 trucks, Scania set out to create a gigantic clock made out of trucks. 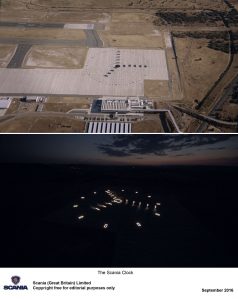 Tick, tock, truck: Scania has taken on the toughest challenge of them all – the race against time. In a challenge involving 14 trucks, Scania set out to create a gigantic clock made out of trucks – one that would run for 24 hours straight. A film of the event was premiered on YouTube at 18:00 hrs UK time on Tuesday 20 September 2016.

The objective of the clock was to demonstrate that regardless of the type of operation, Scania can always offer a solution tailored to precisely meet the need.

“Trucks are large and powerful machines, but they’re also intricately designed, refined instruments, just like watches,” explains Staffan Arvas, Head of Marketing Communications at Scania AB. “Each truck had to be optimised for its specific task in the clock, and real-time monitoring and analysis through our connected services made the whole operation possible.”

The trucks that made up the clock faced a variety of difficulties depending on which clock hand they were forming. The trucks that made up the second hand had to drive around a circular track every 60 seconds for 24 hours. The inside truck had to maintain a constant speed of 13 km/h, while the outside truck had to hold a constant speed of 53 km/h. For the trucks making up the minute and hour hands, the challenge was to ensure a perfectly synchronised sequence of starts and stops.

In order to maintain a correct, even speed while minimising fuel consumption, each truck had to be carefully managed depending on their position in the clock. Scania fleet managers in the control tower were able to keep track of all the trucks and constantly monitor the status of each vehicle to avoid unexpected stops and keep wear and tear to a minimum. The drivers played a key role in ensuring that the whole operation worked smoothly. Elin Engström, a truck driver at Scania, played a lead role in the second hand that all the other trucks had to follow:

“The most demanding challenge in long haulage is precision and punctuality,” says Elin. “The clock was the ultimate test of staying in your line, maintaining your speed and keeping track of every second for 24-hours straight. All the drivers had to be in perfect sync and precision was the key to achieving this.”

The clock was filmed using five different cameras, which allows viewers to switch between different angles on the website. Visitors to the site can also learn more about the project and the new generation of Scania trucks and services.