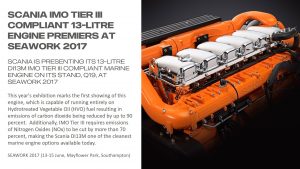 This year’s exhibition marks the first showing of this engine, which is capable of running entirely on Hydrotreated Vegetable Oil (HVO) fuel resulting in emissions of carbon dioxide being reduced by up to 90 percent. Additionally, IMO Tier III requires emissions of Nitrogen Oxides (NOx) to be cut by more than 70 percent, making the Scania DI13M one of the cleanest marine engine options available today.

The DI13M range utilises Selective Catalytic Reduction (SCR) to help achieve its low emissions. This proven technology is built by Scania in-house and is used extensively across its commercial vehicle ranges. SCR ensures minimum emissions of NOx and uses AdBlue, a urea-based solution, which is injected into the exhaust system to convert toxic nitrogen oxides into water and harmless nitrogen gas.

“Available in a selection of power output steps from 257 kW (350 hp) to 405 kW (550 hp), the IMO Tier III compliant Scania DI13M range provides an ideal solution for both propulsion and auxiliary power applications,” says David Bamber, General Manager – Scania Engines. “When used for propulsion, the engine continues our industry-leading tradition of delivering optimum fuel efficiency without compromising performance. As an auxiliary power source, the compact design of the unit, its adaptability and standard interfaces make it ideally suited to a wide range of onboard applications.”

In support of its IMO Tier III engine range, a cutaway model of an SCR module will also be on display on the Scania stand. This unit will show visitors exactly what the module comprises while also serving to demonstrate the principles of Selective Catalytic Reduction exhaust after-treatment.

The third unit on display on the Scania stand at Seawork 2017 will be a 16-litre Scania DI16M V8 power unit. With a power output of 846 kW (1,150 hp) this lightweight engine has the top power to weight ratio on the market. Featuring Scania’s Xpi extra high pressure injection system it is also the most fuel-efficient engine in its range, saving up to five percent against comparable models. The DI16M is equipped with a Scania-developed Engine Management System to provide complete control over all aspects of performance, and can be fitted with a range of accessories to meet the needs of a wide variety of applications.

A twin Scania DI16M powered Goodchild Marine Services SB Lynx 16-metre catamaran passenger vessel will be delivered to her new owners Staffa Tours at the show. She is the first built in the UK to the new Maritime and Coastguard Agency code and will be operating from Tobermory once she enters service.

It is also hoped that a second Scania-powered vessel, a twin DI16M powered Thames Clipper built by Wight Shipyard Co. will visit Seawork 2017.