November 1991 and two West Midland Police Drug Squad Officers were contemplating their next trip to Romania with an aid convoy. Up to this time they had been content to drive the smaller lorries but now one of the officers, Steve Davis, had obtained his L.G.V. licence and the second, Dave Nix, had his course booked.

The thoughts were now let’s see if we can borrow an articulated vehicle and take a large amount of aid to Romania.

Steve had learnt to drive on a Scania and had been told by the Police Driving School instructors that Scania were undoubtedly the best vehicles so it was not a hard choice. ‘Keltruck are right on our doorstep. Let’s try them’. Steve and Dave then went to Keltruck and asked to see ‘The Boss’, Chris Kelly. ‘The Boss’ however was not available – he was away doing an aid trip of his own to Albania. The Keltruck staff meanwhile gave the boys hope that a lorry might be forthcoming.

When Chris returned from his trip he was visited by Steve and Dave and asked about the possibility of using a Keltruck vehicle. Immediately the answer was yes and also that a trailer would also be made available as and when needed and that it would be loaded at Keltruck’s premises and kept secure there. If there were any problems then Chris was to be spoken to as soon as they became apparent.

Over the next three months the loads were obtained for the lorries that were to depart on the 4th April 1992.

The final weeks were hectic but amid much encouragement from all the Keltruck personnel the trailers were loaded with forty-five tonnes of much needed aid.

The vehicle that the two ‘drivers’ were to use was unveiled. A brand new Scania 113M Centurion with all the extras. Steve and Dave couldn’t believe that they were to be entrusted with such a vehicle. The two had a test drive in the lorry and hearts were in mouths as they drove it for the first time. To quote a member of Keltruck staff, “It’s better than driving a car.”

The great day of Saturday April 4th dawned and the lorries and trailers were finished off with their loads and after a great send off by Keltruck and Kevin Lloyd (Tosh Lines from The Bill), his family and a number of others, the convoy led by the Keltruck Scania left Birmingham for Bucharest, Romania.

Four days of driving later the lorries pulled into the Dinamo Bucharest Stadium. It had been the most trouble free run into Romania that Steve and Dave had experienced. They only had to fight off other drivers in the convoy who wanted to have a drive of the ‘Centurion’. The only problem they had encountered was on the road from Arad to Deva in Romania. The roads had deteriorated that much over the winter that the bumping and jolting was causing the Compact Disc player to jump. (Weren’t they hard done by!) Over the next two days the aid was delivered to the establishments it was destined for and then the long haul was due to start.

The lorries were parked nightly in the stadium car park under armed guard but it was still amazing how many people wanted to look inside the ‘Centurion’ and at it.

The journey back started and once again after four days hard driving the convoy arrived back in Birmingham. It was with great reluctance that the lorry had to be returned to Keltruck but Steve and Dave did not have anywhere to hide it and besides Chris Kelly would probably have missed it!

It has been a great pleasure for both Steve Davis and Dave Nix to have been associated with Keltruck, Scania, Keltruck personnel and Chris Kelly. It would not have been possible for the convoy aims to have been accomplished without the help of them all. It is estimated that during the April 1992 convoy aid with a value in excess of a quarter of a million pounds was delivered to hospitals and orphanages in Romania.

From a personal point of view it was also a great thrill to be entrusted with such a magnificent vehicle as Steve and Dave were. There is not a lot that can be said to Keltruck and Chris and everyone at Keltruck except a great big thank you. Without you all it would have been impossible. 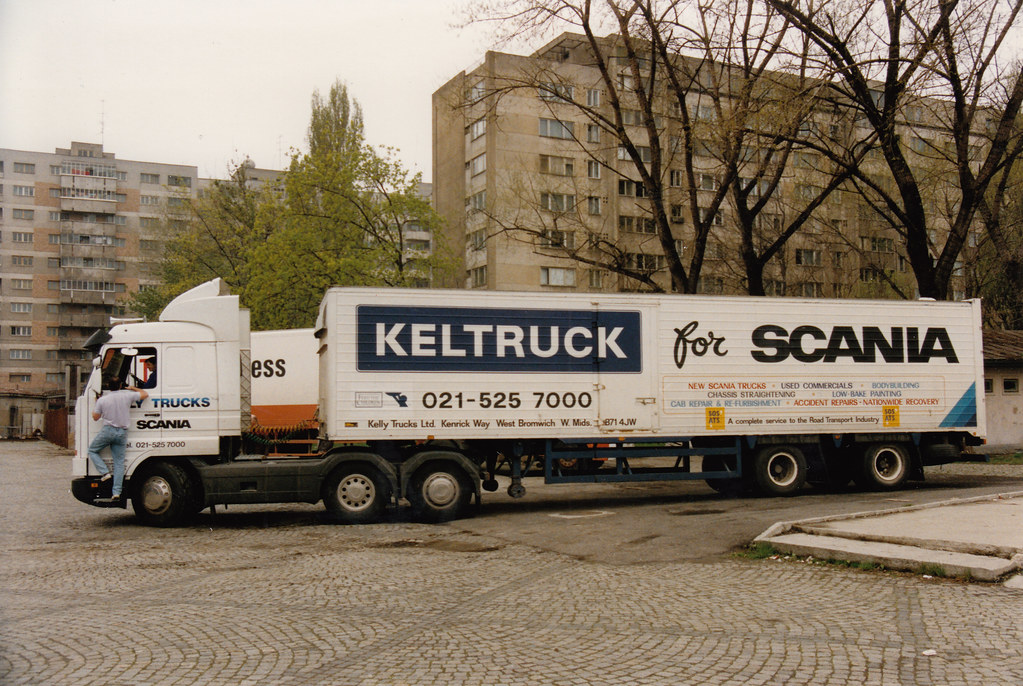