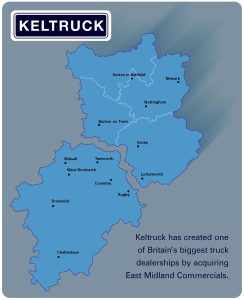 Keltruck: The new name for Scania in the East Midlands

The new, enlarged Keltruck will have annual sales of around £100 million and almost 500 employees. With 17 locations across the Midlands, it is the UK’s largest independent dealership for Scania vehicles.

Chairman Chris Kelly said: “We have created a stronger business which will bring us even closer to our customers and enable us to offer greater career prospects for our people.”

Mr Kelly, who founded Keltruck in 1983 and who was also a 50 per cent shareholder in Scania Distributor East Midland Commercials, predicted the business would grow to more than 550 employees next year.

The company is already planning to open a new vehicle maintenance unit in Buxton in February.

The acquisition gives Keltruck a major presence in the East Midlands, a growing centre for logistics companies with an expanding airport, where it wants to increase market share.

Dan Hoij, managing director of Scania Great Britain, said: “We are fully supportive of the acquisition. There will be many benefits to Scania GB, the enlarged Keltruck and, most importantly, our customers.”

The two businesses will run separately until the end of this year and then fully merge into one company on 1 January 2005.

John Biggin, Keltruck managing director, said: “Customers will see improved services from more depots nearer to them, and there will be more choice for our used vehicle customers. I am very pleased to be taking on this new challenge. I have worked closely with the EMC management for several years and have great respect for them and their achievements. It is a well run company with good people.”

The company’s main activities are the sale of new Scania trucks and parts and the sale of used – mainly Scania – trucks along with repair and maintenance for the Scania range, including bus and coach. The company also operates a commercial vehicle accident repair centre as well as the world’s largest Scania truck recycling facility selling used and reconditioned parts.

He co-founded East Midland Commercials Limited in 1992 with his friend and business partner, Alan Murrall, who died in May 2002.

EMC has been purchased from Mr Murrall’s family and their business partner.

Both Keltruck and EMC are distributors for Scania, a commercial vehicle manufacturer specialising in heavy trucks.