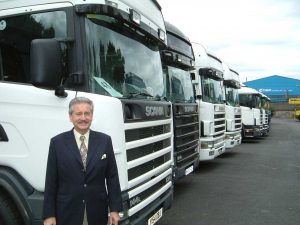 As quoted in today’s Commercial Motor, Chris said that there was “a very frank exchange of views and I think the Chief Constable knows exactly how truck dealers and operators feel. I am happy to say that for the first time in a while I’m optimistic that the issue of truck theft is going to be taken seriously.”

Chris, the son of a long-serving policeman, is also a member of the Retail Motor Industry Federation (RMIF) National Truck Committee & recently joined JAGOLT (the Joint Action Group on Lorry Theft) – an initiative of various groups such as the police, insurers, RHA, Freight Transport Association & the motor trade which meets at New Scotland Yard & is intended to halt the theft of trucks &/or their loads.

Meanwhile, John Shepherd has had ANOTHER vehicle stolen:

The vehicle has been sighted but as yet the thieves are still at large. The thieves also attempted to steal a 3 series Scania but were prevented from doing so because the vehicle’s batteries were flat.