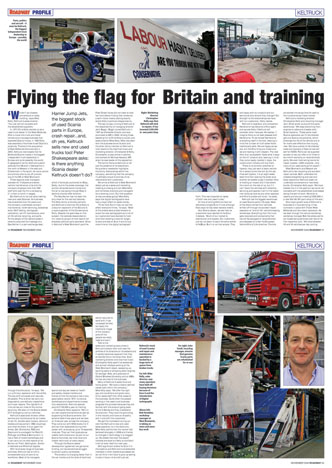 Flying the Flag for Britain and Training

In 1974 Chris Kelly started up as a used truck dealer in the West Midlands. After a move into truck and trailer rentals and a haulage business that operated Scania trucks, in 1983 Kelly was awarded a franchise to sell Scania’s products. Thanks to the acquisition of East Midlands Commercials in 2004, Keltruck now boasts that its Midlands empire makes it the biggest independent truck dealership in Europe and quite possibly the world.

In geographic terms, Keltruck’s patch extends from Buxton in Derbyshire in the north to Newark in the east and Cheltenham in the south. Its nerve centre and primary site is just off junction one of the M5 at West Bromwich. Three regional area managers oversee its 13 depots and seven vehicle maintenance units and the company employs more than 500 staff who cost the firm a whopping £1 million a month in wages.

But Keltruck is not just about selling new and used Scanias. Its business has diversified over the years and the company undertakes contract maintanence, trailer servicing, bodyshop work, MoT testing, tachograph calibration, tail-lift maintenance, end-of- life vehicle recycling, and parts. To the delight of the tabloid press it recently acquired the fuselage of a Sea Harrier in a part-exchange deal, which it famously auctioned on eBay. Sadly, due to the press coverage, the auction attracted some cranks and the jet is now going through eBay’s second-chance-offer scheme.

The Sea Harrier has not been the only draw for the red-top tabloids. The Kelly family is fiercely patriotic and Keltruck’s chairman Chris Kelly is a staunch opponent of the EU and is a loyal supporter of the Conservative Party. Despite his openness on this subject, the tabloids descended on him recently as part of their search for shadowy political party sponsors. Once in Keltruck’s West Bromwich yard the Fleet Street hacks did not need to look too hard before finding their evidence: a semi-trailer clearly stating exactly where Kelly’s political allegiances lie.

The day-to-day running of Keltruck is the responsibility of managing director John Biggin. Biggin joined Keltruck in 1997 as aftersales director and was promoted to MD in 2002. Among those assisting him is Chris Kelly’s cousin and sales director Mike Kelly. Mike has been with the business since its start and the other family member on Keltruck’s main board is the chairman’s son and marketing director, Christopher D Kelly. Christopher is also active in politics and worked for Michael Howard, MP, when he was leader of the opposition.

The family theme at Keltruck is not just the preserve of its boardroom. Its quarterly newsletter highlights the family relationships within the company, something that the company if justifiably proud of and key to its relationship with customers.

We arrive at Keltruck’s West Bromwich depot just as a sales and marketing meeting is closing and join Mike Kelly and his fellow directors and managers for a working lunch. Our first question is how are sales going? Mike Kelly says that digital tachographs have had a major affect on sales trends. “To be frank Euro 4 has not had the affect everyone thinks,” he says. “Most of the orders were pulled forward to avoid the new tachographs but a lot of our customers have decided to hold onto their existing trucks for longer, to wait and see on Euro 4 and to buy more time on the digital tachograph front. This has impacted on sales of both new and used trucks.”

At time of writing Keltruck had not delivered a single Euro 4 truck although Kelly says he has taken several orders. As a Scania dealer, we ask how its customers have reacted to the Euro 4 debate. “Much of our market is distribution and tippers. Our customers just do not seem to want the extra bother of AdBlue. But it is not that simple. They are happy with our product and our service so why should they change? Our strength is the relationships we have with our customers,” Kelly replies. Keltruck’s neighbour and competitor Hartshorne has become a Hino agent and we ask Kelly if Keltruck will consider other marques. He replies: “I imagine Volvo is not best pleased with Hartshorne. To be honest Hartshorne is shooting itself in the foot, bearing in mind the number of multi-axles Volvo traditionally sells. We are happy as we are, but the Hino thing is a threat and we are treating it with respect. The new Hino is an acceptable “does what it says on the tin” product and, bearing in mind they come ready- bodied in days, the construction industry will buy them.

“There is no emotion attached to tippers, they just want a basic vehicle for a decent price that will do the job. If we sell tippers, it is an eight-week lead-time from placing the order plus another six weeks to get it bodied. Hino is making an impact and it has stolen the march on the rest of us, but if it can’t back the vehicles with reliability, servicing and spares it will hit the tipper men twice as hard as any other operator and Hino’s bubble will burst,” he adds. Keltruck has the biggest warehouse of used Scania parts in Europe. Most of the stock comes from vehicles written off through its accident repair operation or ‘end of life’ vehicle breaking workshops. Everything from the truck gets recycled and components that cannot be salvaged or reconditioned are disposed of under the European Vehicle End of Life directive. The bits are sorted into scrap bins for sale to the lucrative scrap metal market.

Keltruck’s marketing director Christopher Kelly and recycling manager John Small show us around the parts warehouse. “We keep everything from engines to cabs and chassis rails,” Small explains. “These parts mean Scania operators can fit refurbished genuine Scania components, which prolongs the life of the vehicle and is far more cost-effective than buying new. We have a stock of refurbished cabs and typically a TopLine cab will sell for £6500. Parts can be supplied as seen or we can offer a full three or six-month warranty on reconditioned parts. We even hold wiring looms for newer models – 2004 onwards – and many of our used parts go for export.”

West Bromwich and Newark are Keltruck’s two recycling and accident repair centres. Both undertake hot chassis straightening and cab and body repairs but Keltruck does not undertake conversions or new body builds. Christopher Kelly says: “We have looked into it in the past but we could not compete with the established businesses doing this sort of work. We stick to repairs and we are investing £200,000 in a new 50x18x18ft paint shop at this site.”

One major growth area of Keltruck’s business is in bus servicing. It has contracts in place with Travel West Midlands and two coach operators. As we walk through the vehicle workshop, workshop manager Bob Venables points out buses being serviced over two of its five inspection pits. “We have between 45 and 55 vehicles per day coming through this site alone,” he says. “We run a 24-hour operation with two shifts.

“The day shift is busiest and requires 20 people. This is when we carry out diagnostics, pre-delivery inspections and major repairs. The nightshift of nine carries out most of the routine servicing. We also run the Scania Assistance 24/7 emergency call out vehicles.” Keltruck’s specialist division offers service and maintenance for all makes of tail-lift, double-deck trailers, demount bodies and equipment, VBG couplings and roller shutters. It is an agent for Anteo, Del, Dhollandia, RSG and Zepro and is a subagent for Ratcliff- Palfinger and Ross & Bonnymann. It has a fleet of mobile workshops and it can carry out on-site repairs at its Burton-on-Trent, Nottingham, Sutton in Ashfield and Willenhall depots.

With its diverse range of business activities, Keltruck has to fulfil a considerable duty of care to its workforce. Most of its managers spend one day per week on health and safety-related matters and thanks to this the company has a very good safety record. With numerous workshops and departments to keep fully operational, Keltruck spends around £150,000 a year on training. Christopher Kelly explains: “We run our own apprentice scheme as well as supporting the Scania scheme. Our scheme lasts three years and we take on three per year across the company. They come out with NVQ levels 2 or 3 and can then specialise during their career with us studying up to 10 separate modules. They can then graduate as master technicians and, as part of our Scania franchise, we must have one master technician at every depot.

“Through the Scania dealer development agreement we get some funding, but we sometimes struggle to attract quality candidates. The product is changing faster than in the car market and the level of technical ability required to work with it has increased tenfold, but sadly the traditional image of the industry puts off the people we really need and want.”

Talk to the sales and marketing executives in Keltruck’s board room and read the profiles of its directors on its website and it rapidly becomes apparent that they all started life on the shop floor. Even marketing director and chairman’s son Christopher Kelly spent his weekends and school holidays working at the West Bromwich depot, sweeping up, painting walls or stripping down engines for salvage. Now, as a graduate of Oxford Brookes University and an MBA, he has returned to the business.

Many of Keltruck’s sales force are home grown. “We have a clearly defined career path within the company,” Mike Kelly says. “We offer the right pay and conditions and grow many of our sales staff from other areas of the business. Quite often the people working in the used truck business progress the quickest because they are familiar with the product going back to the 3-Series and they understand its evolution. They have the grounding in the industry and have an empathy with it and with the customers.”

We got the impression during our visit that Keltruck’s new and used sales operation is in the doldrums. Mike Kelly admits that the market had behaved strangely in 2006 and thanks to changes in technology it is clogged up. He added that even the export markets are slow but Kelly is confident it will all even itself out next year.

With significant orders for Euro 4 in the pipeline and Keltruck’s considerable interests in other related businesses we do not think it will have to give up selling trucks in favour of aircraft just yet.