The Q3 2006 edition of Scania World magazine features a profile of Keltruck’s relationship with NX Group, the biggest bus & coach operator in the UK. 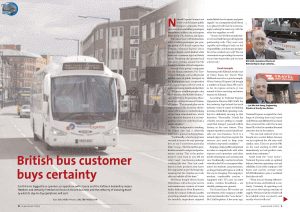 For Britain’s biggest bus operator, co-operation with Scania and the Keltruck dealership means freedom and certainty. Freedom to focus on its core business and the certainty of knowing exactly what its day-to-day operations will cost.

National Express Group is one of the world’s largest public transport companies. Every year more than one billion passengers use its buses, trolleys, city and express buses in the UK, America and Spain.

With more than 1,000 destinations and 16 million passengers per year, the group’s UK-based express bus company National Express Ltd is Europe’s largest, and its distinct white buses are a common sight on British roads. The group also operates local transport systems around the UK through a number of local companies.

Several of the group’s companies are also Scania customers. For Travel West Midlands, with an 80 percent market share of public transport in the Birmingham area, co-operation with Scania began with the need to replace an ageing double-decker fleet.

“We move a million people a day so we mainly need double-deckers,” says Jack Henry, Engineering Director of the city bus division at National Express. “The original plan was to replace like for like, but in my discussions with Scania we started looking at the Omni articulated bus, which was attractive because it is an integral bus which we could buy from a single supplier.”

With his background in trucking, Mr Henry also had a relatively unorthodox approach to buying buses.

“Traditionally, when buying buses we used to have to be very prescriptive, to say I want these particular bolts,” he says. “But I turned the specification around to output and performance, saying ‘This is the performance I want from it, you tell me what I need.’ And Scania preferred working like that. They had confidence in their products; they knew the components to give the longevity, ensuring that the vehicles are available and reliable all the time.”

Under the contract, Keltruck handles everything related to the buses, from the monthly inspections required under British law to repairs and parts supply ? an arrangement Jack Henry is so pleased with that he is increasingly working the same way with his other bus suppliers as well.

“Scania was the first manufacturer we have built this type of long-term partnership with. They were very capable and willing to take on the responsibility, and from my perspective it has worked very well. We can concentrate on providing the service we are here to provide, and we have a fixed cost.”

Partnering with Keltruck to take care of Omni buses for Travel West Midlands served as a good example. When National Express Ltd bought a number of Scania Irizar PB coaches for its express services, it was natural to leave servicing and maintenance to Keltruck.

According to National Express Operations Director Bill Cahill, the bus industry lags behind the truck industry when it comes to thinking in terms of total fleet operating costs, but it is definitely moving in that direction. “Personally, I think the vehicles are now getting so complicated that doing it yourself will be history in the near future. They require expertise in areas that fall outside our core business. So it is a natural step to buy from experts the services you need to keep your vehicles in top-notch condition.”

Keeping a high profile is important in order to compete both with other express coach operators and other modes of transport, such as trains and cars. Traditionally, coaches have been viewed in the UK as a transport alternative for students and pensioners, an image National Express is well on the way to changing. The company’s modern, comfortable coaches – equipped with TVs and, on some routes, wireless broadband – are steadily gaining new ground.

The Scania Irizar PB coaches are one element of the company’s deliberate investment in the “wow factor”, Mr Cahill explains. A few years ago, National Express accepted the challenge of showing that coach travel could be fun and different. It has more than achieved this with the Scania Irizar PB, which he considers the most attractive bus in the market.

“No one had noticed when we bought new coaches before, because we just replaced the old ones with similar ones. Then we put the PBs on the road starting in 2003 and immediately we had positive comments from customers.”

Aside from the “wow factor”, National Express seeks an optimal balance between operating cost and reliability. Each of the company’s 600 buses and coaches average some 225,000 kilometres a year, a workload that takes its toll.

“What you are buying effectively from Scania and Keltruck is certainty. Certainty of operating cost, and you’re also buying certainty of supply. We know that the vehicle will be available when we need it, and exactly what it will cost.”

Uptime and reliability mean everything to bus and coach operators in the deregulated British market. Far-sighted Scania dealer Keltruck realised this some years ago and began offering bus and coach customers comprehensive servicing and maintenance at a fixed monthly cost.

Every month, about 100 city buses and coaches pass through Keltruck’s main workshop in West Bromwich in the British Midlands. The number is increasing all the time.

“Nowadays buses and coaches account for around 30 percent of our daily sales at the West Bromwich workshop,” explains Russ Warner, Regional General Manager. “That’s a 20 percent increase just in the past year.”

A large part of the increase is due to the company’s proactive efforts to sell service and maintenance contracts, both to existing and new Scania customers. More and more bus and coach operators are discovering the advantages of one-stop shopping for all their vehicle needs.

“We don’t sell buses and coaches. Scania (Great Britain) handles that,” explains Andrew Bentley, Keltruck’s Group Aftersales Business Development Manager. “But we are there as part of a comprehensive customer offer, with our service and maintenance agreements. Together we offer a complete package that gives customers a stable platform to focus on their core business.

“With our packages, customers can make decisions based on operating economy and uptime,” he continues. “A service and maintenance contract saves them money and problems in the long-term.”

With 500 employees, Keltruck is the largest independent Scania dealer in Britain. Aside from West Bromwich, the company runs twelve Scania authorised aftersales depots and five customer vehicle maintenance units. Keltruck’s West Bromwich and Nottingham workshops also belong to the network of specialised bus and coach servicing and maintenance centres that Scania (Great Britain) has created around the country.

The 25 service technicians employed by the 24-hour workshop in West Bromwich include seven Scania Master Technicians. Nearly half of the workshop’s service techs are bus and coach specialists, which Mr Warner says is necessary in order to maintain expertise.

“Buses and coaches, like all other vehicles, are becoming more technically complex to service,” he says. “So it is natural for our employees to specialise either in buses or trucks.”

Today Keltruck has some 20 bus and coach customers with full service and maintenance contracts. A major element of these contracts is the regular inspections all bus and coaches in the UK must undergo – every two weeks for tourist coaches and intercity buses and every four weeks for city buses – but repairs of any defects discovered during these inspections and any necessary parts are also covered.

“If we spot anything during an inspection, we repair it immediately,” Mr Bentley says, “in order to keep customer downtime at a minimum.”

At Keltruck the whole bus, not just the Scania components, is well cared for. The workshop has gradually expanded its expertise and can now handle repairs of air conditioning, WCs, wheelchair lifts, rear-view cameras and electronic destination signs.

“We are always open to suggestions from our customers on how we can make their lives easier,” says Mr Bentley, who is currently looking into the possibility of also cleaning customers’ buses while they are in for service. “We do everything but drive the bus. All the customer has to do is add
the driver and fuel.” 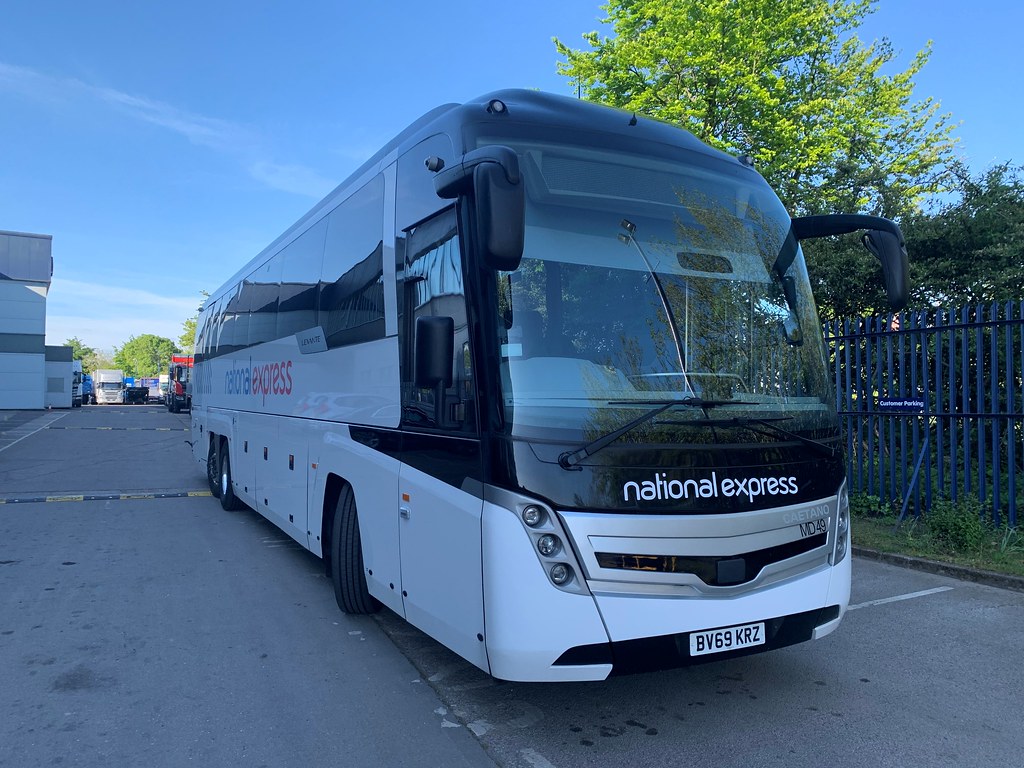