Sponsorship takes off with Keltruck

easyJet pilots Steve Moody and Andy Brown are well on the way to reaching their mountainous fundraising target for easyJet’s charity of the year, the National Society for Epilepsy (NSE), thanks to support from Keltruck. They are hoping to raise £19,344 – one pound for every foot they are going to trek up Mount Kilimanjaro, Africa’s highest mountain. 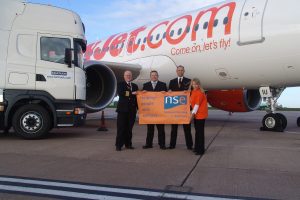 Andy and Steve, who both fly from Nottingham East Midlands airport, have been appealing to passengers on their flights, and are well on the way to their cash target. Keltruck’s Directors were on board one of Steve Moody’s flights and responded to the Captain’s appeal to passengers.

NSE, the UK’s leading epilepsy charity, has been easyJet’s charity partner since November last year. Money raised by the airline, its staff and passengers will support NSE’s Seahorse Appeal supporting research into the cause of epilepsy, the UK’s most common neurological disorder.

Mt Kilimanjaro is one of the largest volcanoes and is also the highest freestanding mountain in the world. Steve and Andy will be taking seven days to complete the climb, spending as long as practically possible on the mountain in order to mitigate the effects of altitude sickness. On the final night they will rise at midnight and climb for 15 hours to make the ascent to the summit and complete the subsequent descent. They will be returning to London Heathrow on December 14 2005.

Andy commented, ”I felt that I needed a challenge and was also keen to raise money for a good cause. NSE, as easyJet’s charity of the year, was our obvious choice but it is also a charity close to our hearts, as we both know people who have had to deal with this unpredictable condition. We’re just glad that we have managed to raise so much money for NSE and hope to raise a lot more over the coming months in the lead up to the trek.”

For more information, or to sponsor the pilots, please visit: