Paul Green, Group Warranty Manager for Keltruck Ltd., completed a grueling 220-mile charity cycle from the extremes of Keltruck’s branch operations in Cross Hands in west Wales to Worksop in north Nottinghamshire. Stopping off at number of other Keltruck locations en-route the event was aptly named ‘Tour De Branch’ and was all in aid of the children’s charity ‘When You Wish Upon a Star’.

In May 2011 Paul was diagnosed with Non-Hodgkins Lymphoma. After several months of treatment Paul was given the all clear and set about regaining his fitness. Paul comments:

Following recovery from my illness I wanted to get myself back into shape. I bought a bike and pair of lycra shorts and, as they say, went for it! It was while Bradley Wiggins was powering to Tour de France glory that a couple of work colleagues set down a challenge. 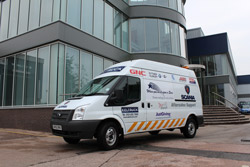 After careful planning and months of training, Paul had assembled his team of cyclists to complete the challenge, all riding to support their own chosen charities. Riding along with Paul were Richard Mole who runs a landscaping and building business covering the Midlands who has been a close friend of Paul’s spanning over two decades, Richard’s business partner Adam Fulford was rider number three and Keltruck’s own workshop foreman from the Tamworth branch, Noel Wakling, was the fourth cyclist to complete the team. The support team for the cyclists comprised of Kevin Law and Dave Chambers who are both managers from the Keltruck West Bromwich Head Office and good friends with Paul Green. Their support team vehicle (a Keltruck 24/7 Scania Assistance vehicle) was emblazoned with decals of companies that have sponsored and supported the event.

With the team fully assembled, the date was set and plans put in place for Saturday 22 June 2013 for the four cyclists and their support team to commence a cycle ride from Keltruck’s most southerly branch at Cross Hands, Llanelli, Wales to the most northerly branch at Worksop, Nottinghamshire. The journey would span a distance of 220-miles which was broken down into a two day event with opportunities built in to stop at five Keltruck branches along the way. 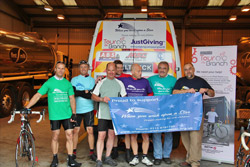 Paul Evans, Keltruck Cardiff Branch Manager also suffered Non-Hodgkins Lymphoma at the same time as Paul Green and was keen to join the challenge for the first 30-mile leg of the journey to Trecastle. Paul provided plenty of wit and humour for the first stage declining wet weather gear with his sole reasoning being that he was Welsh! They were sent on their way by Keltruck’s managing director, Andrew Jamieson, and Neil Vazey, General Manager of West Bromwich.

Cross Hands to Trecastle
Cross Hands branch at 08:30 the team headed towards their first planned meeting point of Trecastle through the Brecon Beacons National Park which is 25 miles from the start of the event. Trecastle (Town of the Castle) is named after Castle Tump, an early 11th century Norman fortification, located on the main A40 Trunk Road between Brecon and Llandovery. The first leg of the journey was very windy and extremely wet, Paul Green commented ‘it was delightful to see the welcoming sight of the support team and hear their kettle whistling. Paul went on to say that this was his favourite part of the journey which he would complete again in the future; he mentioned that whilst the terrain was quite a challenge the sights were breath-taking.

Trecastle to Hay on Wye
This section of the journey was a mixture of country lanes and main roads, with the team still attempting to average a steady 15mph. The team arrived in Hay on Wye at 13:00 to be greeted by the support crew for some refreshments. Hay on Wye is within the Brecon Beacons, lies on the River Wye and just North of the Black Mountains. The town is situated on the Welsh side of the Border from Herefordshire and is 22 miles west of Hereford. The team decided to eat in a restaurant this time and found a quaint café called Oscars Bistro in Hay on Wye. The cyclists were able to replenish their carbohydrates and have warm drinks ready for the next stage. 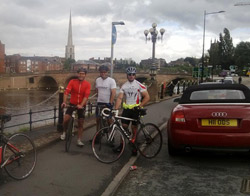 Frome Hill to Droitwich
Leaving their welcomed break, the team departed at 15:30 heading towards the final destination of the day – Keltruck’s Droitwich Branch. This took the team directly through Worcester City Centre when they stopped for a few minutes for a team photograph on the bridge adjacent to the River Severn (pictured). The team continued their journey from Worcester to Droitwich in some welcoming sunshine. On arrival at Keltruck Droitwich, the team were greeted by Droitwich and Cheltenham branch manager, Matthew Pettican who had kindly waited for their arrival. This was the team’s final stop for the day. I asked Paul what was his most memorable moment about the half-way point of the journey was and he said that whilst he was overwhelmed with the achievement he took the most satisfaction when he ate a packet of KVE pork scratchings – perhaps a future sponsor.

The team packed their gear away ready for the following day and travelled to the Robin Hood Pub at Wychbold where the staff had laid on a generously discounted meal for the team.

Droitwich to West Bromwich
With the team up at the crack of dawn, the gear was assembled and a technical issue with Noel Wakling’s tyre corrected by simply swapping the wheel with one of the spares in the support vehicle – the guys had their breakfast and readied themselves for the day ahead, spirits were high and everyone was raring to go. (picture: the team with Matthew Pettican outside Keltruck’s Droitwich Branch)

Matthew and Katie from the Droitwich branch waved the team off at 08:30 in the direction of Bromsgrove, then onto Catshill and Fairfield over the M5 Motorway then on through Romsley toward Halesowen in the West Midlands. Paul mentioned that this was quite a nice section which was downhill with nice views. After Halesowen, the team progressed via Quinton on through to the first meeting point of the day at West Bromwich and the weather was now being kind to the team, it was overcast but quite dry with a low wind. 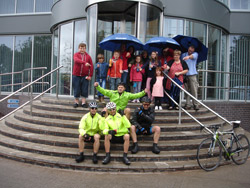 The team were greeted at Keltruck’s Head Office Branch at West Bromwich by family and friends. It was an emotional moment where the cyclist met their family and children along with Paul Greens father. Staff members Neil and Sally Vazey along with John and Ginette Maiden were there to greet the team into the branch for refreshments. A group photograph (pictured) was taken just before the team readied themselves for the next stage of the journey.

West Bromwich to Burton on Trent
The next stage left West Bromwich at 11.10 heading past the West Bromwich Albion Football Club (Paul Green is a season ticket holder here) toward Sutton Park which is located North of Birmingham. The team then headed toward Shenstone which is part of Paul Greens normal training route heading then toward Lichfield and on to Burton on Trent picking up and following the River Trent near Alrewas.

The team arrived at the Burton on Trent branch to a be presented with a round of applause from Andrew and Vanessa Bentley along with Simon and Leanne Rudall all from Keltruck and Danny Walley, Shift Foreman of Keltruck’s Burton on Trent branch who had kindly opened the site up for the welcoming party. The team took a well-earned rest, rehydrated, had lunch and changed clothing having cycled through some considerable rain since leaving West Bromwich.

Burton to Sutton in Ashfield
The team left Burton on Trent at 14.30 picking up on the River Trent again in a downpour of rain through Willington toward Derby, taking the team straight through the city centre. Unfortunately their morale was tested with two further punctures. At this time Paul knew that this had impeded on their planned finish times so the plan was changed to only stop briefly at Keltruck’s Sutton in Ashfield branch for a quick photograph, on arrival they were greeted by Russ Warner Aftersales Director of Keltruck Ltd and his wife Julie. The team then carried on with their journey toward their final destination.

Sutton in Ashfield to Worksop
The team left the Keltruck Sutton in Ashfield branch travelling towards and through Mansfield centre and on past Shirebrook and branching off East near Worksop which put the team North of Sherwood Forest. After a slight detour to avoid a private property the team headed toward the Keltruck Worksop branch to be greeted by the familiar landmark of a wind turbine (Pictured) which powers part of the B&Q warehouse adjacent to the Keltruck Worksop branch. 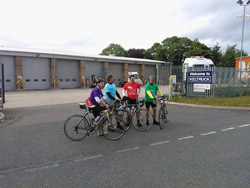 The team were greeted by Branch Manager Tony Jarman along with his family, Tony’s two daughters held up the finish line for the team to ride through. The welcoming party comprised of Russ and Julie Warner (who had previously greeted the team at Sutton in Ashfield) and Mike Kelly, Keltruck’s Fleet Sales Director, with his wife Gill and daughter Ria Kelly along with her partner; Ria Kelly is part of the Marketing Team at Keltruck who assisted with the preparation of the cycle ride.

Paul and the team traveled 220 miles with 16 hours in the saddle and a giant 10,000 calories burned in the process…

The team has raised almost £5,000 for children’s charity When You Wish Upon a Star and is still received donations through a website set up at justgiving.com/Paul-Green12.

Paul’s final comment was “That’s me done… until next year!”

Paul, 43, has worked at Keltruck for 26 years commencing as a YTS apprentice in 1986 at the West Bromwich branch. Having passed his City & Guilds levels 1, 2 & 3 he continued to work as a technician until 1996 when he was offered the position of service advisor at West Bromwich depot which he undertook. In 1997 Paul was promoted to manage the Esso & KwikSave VMUs before moving onto Droitwich in 1998 as Branch Manager. In 2000 Paul was offered the role of Group Warranty Manager which he accepted and still performs today. 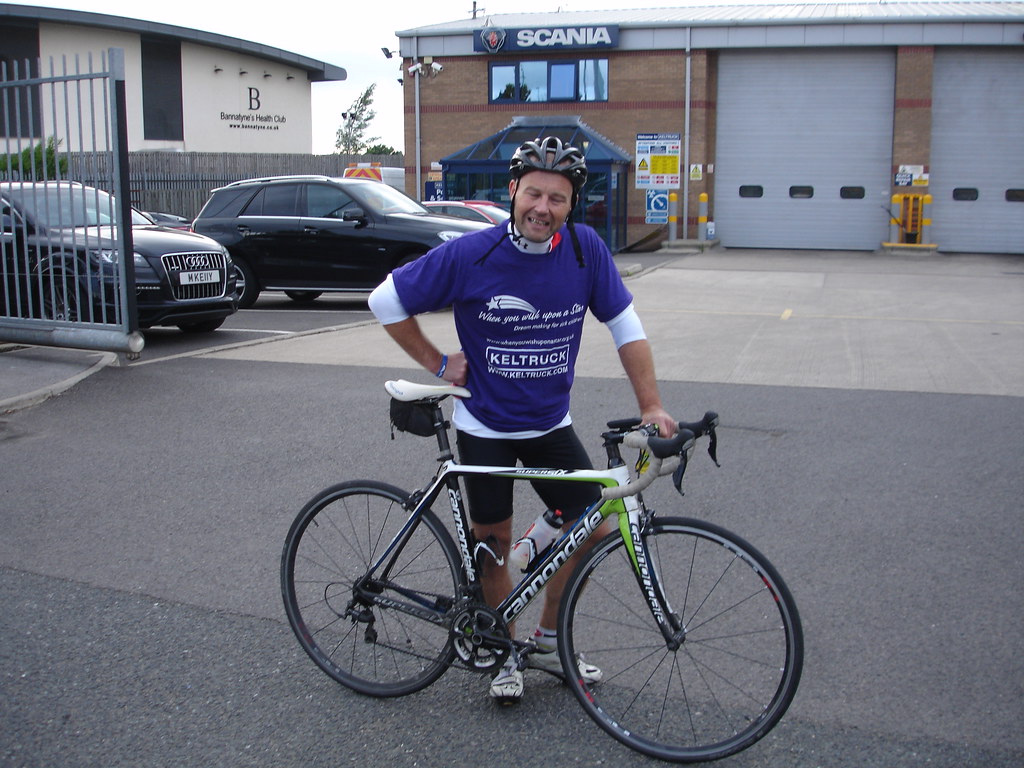