The issue of succession at Keltruck, a lorry distributor with annual turnover of £100m, is closely linked to the fortunes of the Conservative Party. Marketing director Chris D. Kelly could in time assume the managing director’s role currently held by his father, Chris Kelly, having taken an MBA at Imperial College. However, Kelly junior, 30, is also pursuing a political career. If he wins a seat for the Tories in the next election, he will quit the business to enter parliament.

His father, who “loves politics” would be happy with this outcome and consider promoting another member of staff to run the business. Kelly senior, (“59 and fit as a fiddle”) is a prominent Conservative supporter who belongs to the Midlands Industrial Council, a group of wealthy businessmen that donates money to the party.

The installation of a managing director who is not the son of the chairman — Kelly Senior currently combines the roles — might also appeal to external investors. The entrepreneur is hopeful of floating his business on the Alternative Investment Market when markets stabilise.

He says: “There has always been more opportunity in this business than we could cope with while financing growth from cash flow.” Raising funds publicly would support faster expansion. It would also allow Kelly senior to sell some shares, which would help him with estate planning.

Still, given a Labour majority of 4,000 votes in the Dudley South constituency for which Chris D. Kelly has been selected, it would be premature to anticipate his imminent relocation from the West Midlands to Westminster. Nor does the older Kelly plan to retire immediately — though he admits he no longer works the 12-hour days and six-day weeks with which he built up the business.

Keltruck has 500 staff across 18 sites. It generated profits of £4m last year, proving that it is possible to make money in the haulage business. But then Keltruck is a distributor rather than a haulier. It has turned a positive relationship with its supplier Scania to good account.

Kelly grew up in Wolverhampton, not far from the West Bromwich site where Keltruck is now based. He took an apprenticeship as a panel beater and went to work for the Ryland vehicle group.

He says: “It was a very steep learning curve. I began to pick up sales inquiries and when I started to sell vehicles the general manager thought the best thing to do was to make me a salesman.”

He struck out on his own in 1974. A friendly haulier let him park his stock on the old bombsite that served as a haulage yard and lent him a coalshed to use as an office.

By 1976, Kelly had the funds to stock his own yard and buy a Mercedes of a variety favoured by company owners rather than truckers. But the real turning point for the business came in 1983 when he landed the West Midlands sales franchise to sell Scania trucks. The Swedish truckmaker was looking for a distributor to replace an incumbent that was pursuing other business interests.

Keltruck moved to its current West Bromwich headquarters at that time in search of more space and higher visibility. Buying the site proved problematic when Keltruck’s bank refused to lend it £500,000. The company had to raise the money by selling vehicles it had bought to support a rental business. Keltruck then picked up an East Midlands Scania franchise in 1992.

Younger entrepreneurs might regard Kelly as a rather traditional businessman. He is immaculately groomed, with his hair combed off his forehead and his moustache carefully trimmed. His premises are equally shipshape. The desks gleam as brightly as the Scania tractor units parked in rows outside. A clothesbrush hangs in the gents, so that staff can have no excuse for not looking smart.

Old-fashioned virtues have certainly played their part in Keltruck’s success. Many employers stopped taking on apprentices in the 1970s and 1980s. Keltruck was not one of them. “In four to five years, apprentices can grow into first-class technicians,” Kelly says, “We’re looking for bright sparks, staff who are people-focused.”

Keltruck’s profitability depends on the monthly maintenance contracts that it sells to its customers. It guarantees to keep their Scanias on the road for a fixed fee. Clients include Asda, Eddie Stobart, Esso and Wincanton. Kelly says: “We aim to be incredibly friendly — most of our customers are personal friends.” But bonhomie can only take you so far in haulage, as he notes, saying: “This is a tough industry with low margins and if you do not perform, people soon let you know.”

Keltruck wins brownie points with its customers by helping them cut costs. It monitors the repairs to individual vehicles carefully, on the lookout for patterns of wear that point to bad driving. Such feedback allows operators to extend the life of vehicles. The company has also built a £2.5m truck repair facility at a B&Q depot in Worksop. This means the DIY retailer does not have to pay for vehicles to go off site for maintenance.

The company’s PR efforts mingle marketing with patriotism. Its logo is displayed to motorists toiling past the West Bromwich site on the M5, next to a huge flag of St George. The Kellys once acquired a Harrier jump jet as a symbol of British innovation to display beside its trucks. It was eventually sold. “I wanted to put it in my garden,” Kelly says, “but we couldn’t get it around the bend in the drive.” 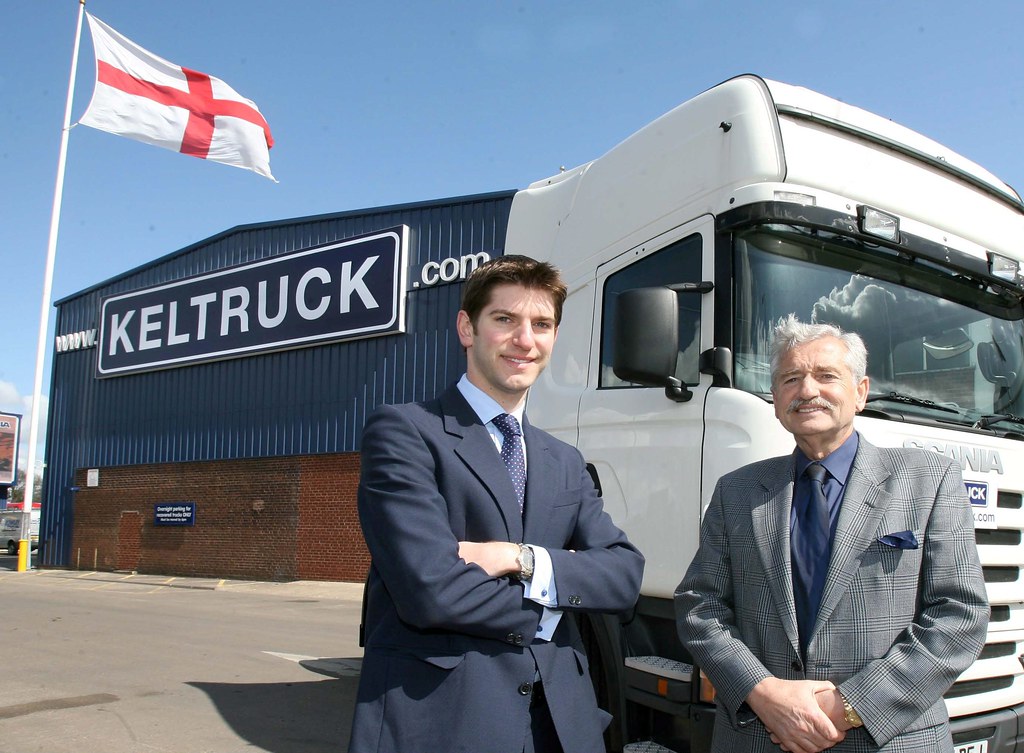 Learn about the history behind the company with our photo gallery