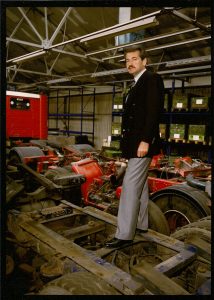 Reconditioned components are an established part of the haulage industry. Scania main dealer Keltruck has taken truck recycling to its ultimate conclusion.

Chris Kelly chooses his words carefully. And he likes other people to do the same. Describe the Scania main dealer’s growing parts reclamation and truck recycling operation as a “sophisticated breakers” and he’ll query your terminology in a voice which is slow, measured and deliberate.

“I don’t like the word breakers,” he says. “It’s got traditional connotations of a dirty yard, swimming in oil, often with a loose Alsation, operated by people with little regard for the environment — I’d say we’re none of those.”

It’s difficult to argue with him: Kelly has spent more money on the recycling operation at Keltruck’s West Bromwich site than many breakers see in profit in a lifetime (at the last count it was a cool £250,000).

Pass through the 2,800m recycling area with its neatly binned components, steam cleaned engines and newly painted cabs (shrink-wrapped to keep the dust off) and you could easily be in the new parts department.

WRITTEN OFF
But these parts aren’t new They’ve all been used before, some on trucks up to eight years old and since written off for scrap. Others come off vehicles that have ended their working life in a road accident. But whatever the source, if the component has life left in it and a potential buyer — it won’t be wasted.

Keltruck’s recycling operation kicked off in earnest some two years ago, spurred on by a number of factors, not least the arrival of the current recession, as Kelly explains: “We kept registering a need, particularly from local operators who at the start of the recession were unable to afford major unit repairs and if we couldn’t provide them with a component at a price they could afford they were quite prepared to go away and visit breakers instead.”

According to Kelly those breakers (with or without Alsatians) weren’t used to dealing with Scanias: “They were still into the tailend of the AFL, Bedford era. I felt it was much better for our customers to be buying used Scania components from us than introducing another element and buying them from someone else.”

While the potential revenue from competitively-priced reconditioned components seems obvious, the message appears to have been missed by many franchised truck dealers.

It was an area of business that traditionally is lost to a distributor; the bottom slice if you like, of the business that we wanted to take account of,” says Kelly.

The potential buyer of recycled, or reconditioned parts has traditionally been the small haulier looking to save money over a factory reconditioned or “new” spare part. However, Kelly believes the market has moved on.

“That bottom slice isn’t always the small haulier, it’s sometimes the larger operator with a vehicle that’s got a fixed life whether for accounting reasons or whatever — and if there’s a major component failure within six months of the end of that total period, one way or another they’ve got to get it back on the road for it to complete that accounting period.” Rather than pay a premium price for the durability of a new spare part for a vehicle that is due to be sold on, many large operators are now buying recycled components at lower prices to see them through that final operating period.

“We’ve got major public companies who’ve bought components from us for that very reason”, says Kelly. “Not because they can’t afford the component but because it would be largely uneconomical for them to go down the route of new, only to sell the vehicle six months later.”

While cynics might accuse Kelly of simply trying to beat the breakers at their own game he insists there is a quality issue which goes beyond simple price considerations. “There was an onslaught of spurious parts over the past three years and this was also a way to counter it. Operators by and large see a spurious part and think it’s the same specification as a genuine part. But they’re not. There are a number of people who offer “reconditioned” major components. When we’ve opened them up and looked inside they’re nothing more than a paint job on the outside of the casing. What we offer with our reconditioned gearboxes and splitters is an assurance that only genuine Scania components have been used.”

TWO-TIER SERVICE
Keltruck offers a two-tier service on used driveline components; effectively with or without full reconditioning. For the price sensitive haulier the extra work and cost of reconditioning can still tip the balance although even with new parts fitted the recon unit is still noticeably cheaper than the all new spare part.

Recycling division manager Remo Gianesi quotes savings of up to 50% on Keltruck’s recycled engines and sometimes more. He cites a typical late-model Scania 14-litre V8; fully reconditioned it will run out at around £5,500, or £3,500 “as is”. The retail price for a “factory reconditioned” non-EDC 14-litre V8 quoted by Scania at Milton Keynes is £15,598.14. The cost of a brand new engine, only supplied on rare occasions, would be even higher.

Of course money isn’t everything. For many hauliers a decent warranty is just as important.

Keltruck backs the sales of its reconditioned engines and gearboxes with its own six-month warranty, although some owner-drivers are happy to settle for three months to get the unit price down.

MAJOR FACTOR
Lost work is another major factor, reports Gianesi; “Time is often the main consideration for the owner-driver. We had one customer with a R143-400 with a major knock on his engine which would have been at least a week off the road which he couldn’t afford. We sold him a used engine, part exchanged for £3,000 plus fitting, and he was back at work without any delay.” While Keltruck can clearly offer savings against new parts Kelly isn’t about to take on the back-street breakers in a price war: “Our prices, because we use genuine Scania parts, have to be higher. Rather like the original product, we never try to pretend it’s the cheapest in the world.”

Finding stock doesn’t appear to be a problem. Keltruck buys around 120 trucks a year just for its recycling operation. Gianesi is in constant touch with potential suppliers by mobile phone, and he’s all too familiar with inflated claims from suppliers: “There’s never a bad one. They’ll all tell you that they’ve just spent a fortune on it — but you take it at face value.”

When the truck first arrives at West Bromwich Gianesi sorts out the key components for potential re-use, including cabs, engines and gearboxes, diffs, front axles, springs, and any other ancillaries worth keeping like alternators and water and power steering pumps. What’s left — scrap metals, tyres, batteries, plastics — are separated ready for collection by outside contractors.

“Wherever possible we’ll start the engine before we take it out and run it up until it’s hot to determine oil pressure and general condition. Then you listen to it, just like a doctor,” says Gianesi.

Keltruck keeps a large stock of engines, both reconditioned and used “as is”, with a range of mileages on them, allowing customers to match engine quality and likely durability with their own needs. If an engine is earmarked for a full recon job it goes into the rebuild shop after a thorough wash. A full strip-down and rebuild on a 14-litre including new pistons, liners and bearings is a week’s work. On gearboxes Keltruck also offers a splitter conversion on standard range-change transmissions that carries a full Scania guarantee.

Bent cabs are straightened on a Josam alignment rig before being repainted, wax injected and then shrink-wrapped. “Cab quality determines how long an operator keeps a truck”, says Kelly. “Since 1984 Scania’s cabs have been largely galvanised and wax injected. As a consequence cabs can be superb after six years so vehicles are being kept longer which has to mean that the Scania parc is extended, so there’s more opportunities for us to sell reconditioned drivelines.”

Keltruck’s used parts operation has already generated comment, together with a few raised eyebrows, at Scania’s head office at Milton Keynes where some have questioned whether what Kelly is doing is really “recycling” or “reclamation” in that the first involves creating new things from old and the second is about putting old things back to work.

The distinction is probably lost on all but the most environmentally correct, although Kelly remains unrepentant about his choice of words: “It’s exactly what’s happening. All the steel from the chassis frame and so on goes to various centres where it’s actually recycled and can be positively followed into a new product.

“The scrap plastic, batteries, tyres, brass and copper all go to different recyclers,” he adds. “Although we don’t do it ourselves we direct the components to the specialist recyclers and that’s why I can confidently say the vast majority of the truck that we take to pieces is recycled in one form or another. The opposite to recycling is to leave a truck in a field and let it rust and rot.”

ALLADIN’S CAVE
Either way, to the average operator Keltruck’s Scania recycling centre is an cave of old and not-so-old parts where relatively new big vees rub shoulders with the odd LB cab. But Kelly doesn’t let nostalgia get in the way of maintaining a very strict stock control: “I’m certainly not the kind of person that keeps something on the basis that one day it may be used again. The time that it’s going to be used again has got to be pretty certain for me to keep an item.” Just like his words, Kelly chooses his used parts carefully. 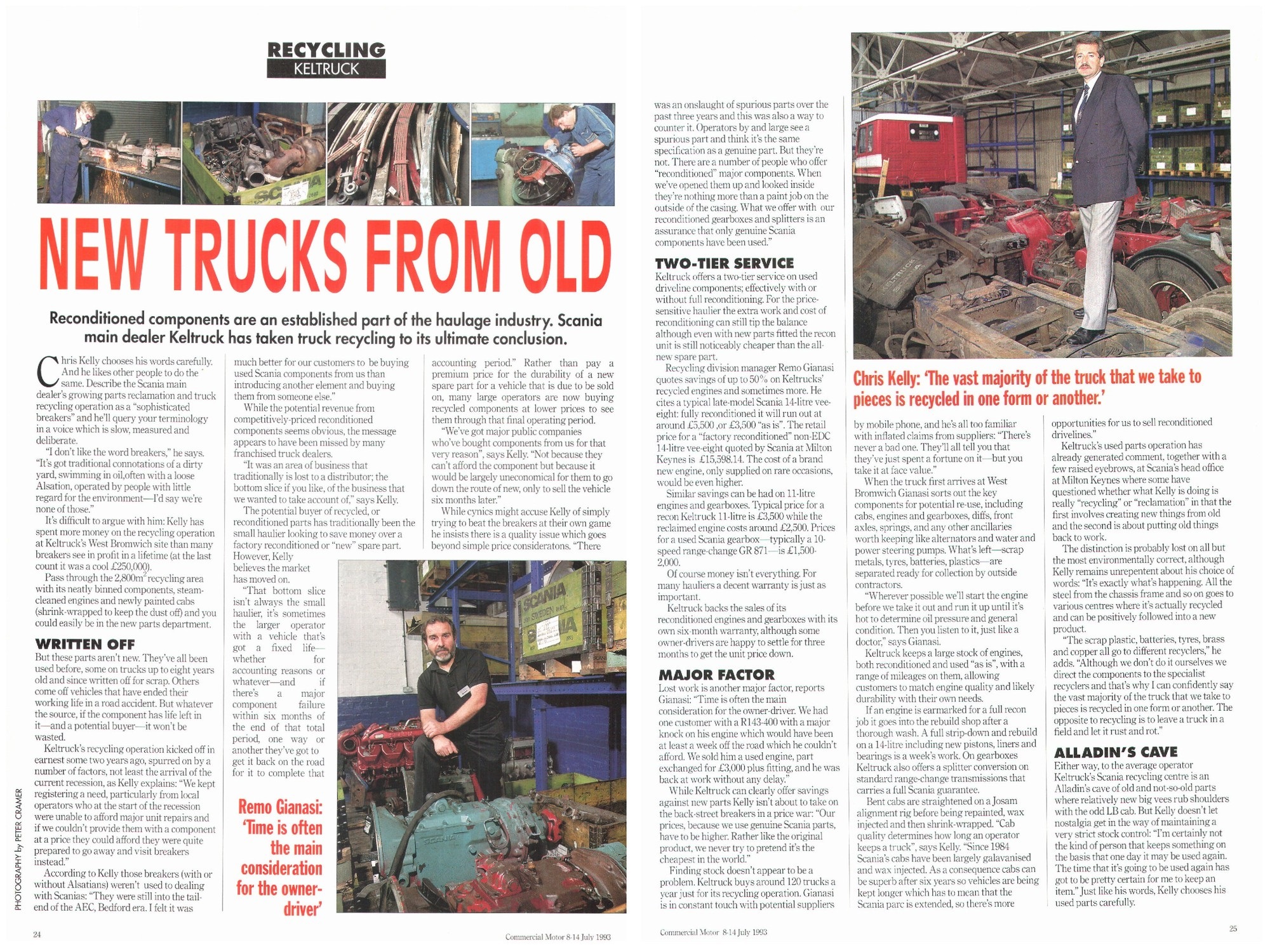