“No matter what vehicle I am driving, for me precision is the thing.”

Why would Nick Mason, founder member and percussionist with progressive rock band Pink Floyd and the man who, according to his P. A., has ‘driven and flown just about everything’, want to drive a truck? “Quite simply because I’ve never done it before. I’d heard from racing driver Allan McNish what a great time he’d had when he drove the R 730 (Scene Scania issue 1 2011) and thought it would be interesting to try – so thanks very much for asking me,” says Nick.

The reason behind the invitation is that in automotive circles today Nick Mason is as much respected for his vehicle collection, expert knowledge and exploits in historic racing cars as he is for his musical success. And in the same way that Pink Floyd never did things by halves (biggest selling UK album of all time; longest ever run in the US charts, both attributed to Dark Side of the Moon, for example) Nick’s assembly of supercars and other assorted collectables has been composed on a grand scale.

“I came from a motoring household,” he says. “My dad worked for Shell at the time, making documentary films about motorsport. He also raced a vintage Bentley. I was taken to Silverstone in the early 1950s and recall very occasionally, at Grands Prix and the like, seeing people such as Stirling Moss and Alberto Ascari compete. So although I eventually went into music, it was vehicles that came first for me – which I suppose was inevitable as rock and roll hadn’t actually been invented at the time!”

But music was to provide the means with which Nick Mason could indulge his passion. As long ago as the mid-1970s he took ownership of a Ferrari 250 GTO, one of only 39 ever built and a rarity today reckoned to be one of the most valuable cars in the world. He’s also got a McLaren F1 plus enough Maseratis, Bugattis and other racing weaponry to fill his own Grand Prix grid.

Amidst this mighty collection is a single truck…but it’s not a commercial vehicle as we know them. For Nick Mason’s sole venture into the world of lorries includes the purchase of a unique Ford Model T truck. What sets this particular vehicle apart are its two previous owners – Sennett Studios, which used it as one of Laurel and Hardy’s cars, and Coco the Clown. And yes, the levers that pop the doors off and squirt water in your face are all still there!

The two trucks lined up at Millbrook Proving Ground for Nick to drive represented a very different proposition indeed. For the loan of them, we are indebted to Bim Mountain of Grampian Continental, Scania dealer Keltruck Limited, owner of the LB141, and Michael Lacey Junior whose vintage tilt trailer was coupled to the LB141 for the day.

The Grampian Continental truck, a flagship model R 730, spends its time plying European routes carrying goods and equipment primarily for the oil and gas industry. “At 730 horsepower it’s a powerful, state-of-the-art vehicle which we’ve enhanced with an array of modcons and luxury fitments,” says Bim. In contrast, the LB141 sports all the creature comforts associated with its time, the mid-1970s. It’s therefore relatively spartan inside by today’s standards, and its V8 engine is rated at a mere 375 horsepower.

Our request to Nick Mason, as a man with more experience of classic vehicles than most, was to compare the old with the new.

“Apart from being truly terrified at the prospect of reversing them, I’m particularly interested in their power and how it is managed,” he told us before starting off. “No matter what vehicle I am driving, for me precision is the thing. Even when I’m competing I have no interest in speed per se, it’s all about retaining control, especially when you’re close to the edge or near the limit of your abilities. I’m looking forward to seeing how that translates for me behind the wheel of a truck.”

After a safety briefing and run through of the controls, Nick took to the Millbrook track in the LB141 accompanied by Mark Agnew, Scania’s Driver Training Manager. Several laps around the high speed bowl were followed by a testing drive around the facility’s alpine route.

“You certainly learn a lot very quickly,” reports Nick. “After my familiarisation session and getting moving, my first task was to set about mastering the art of road positioning. In many ways I found that similar to road racing; it required a combination of concentration, judgement and reading the road correctly. As I focused on that, I also began to appreciate how the weight of the vehicle affects its momentum.”

Next came a vehicle switch and the route replicated in the R 730. “The difference was incredible,” says Nick. “More than anything, it made me glad I drove the LB141 first – I wouldn’t like to have done it the other way round, as I might not have appreciated just how good it was for a vehicle more than 35 years old.

“For example, I had been expecting some kind of crash gearbox, but the five-over-five synchromesh range-change box worked perfectly well and was easy enough to operate. Having said that, compared to the two-pedal Opticruise system of the R730 it was miles behind.

“The brakes too. In the LB141, while they had no trouble stopping us, I found them somewhat on the aggressive side, a bit of a handful, whereas braking in the R 730 is effortless – the feel is just like that of a family car. And I was hauling a laden trailer, so that really is quite remarkable.

“Then there’s the cab suspension and air-suspended seats of the R 730, which make for an exceptionally comfortable ride, and things like the excellent visibility you get with modern day mirrors. Add to that the driveability of the 730 horsepower V8 and the result is a vehicle that’s a pleasure to drive, it’s fantastic, so smooth.

“Finally, I also have to say that I loved the Scania Driver Support system. I’m all for aids which help improve driver focus and concentration. There should be much more of that sort of thing in cars in my view – and I’m sure we would all agree it’s far better to have an impartial judge telling you how you’re driving…rather than a loved one yelling at you from the passenger seat!”

On the road with Pink Floyd

During the course of our time with nick Mason, we reflected with him on the role transport played over the years with Pink Floyd. Renowned for their megashows such as The Wall, for which the only UK indoor venue large enough at the time was Earl’s Court, the band had a transport requirement that set it apart in the music business.

“It wasn’t always like that, of course,” smiled nick. “in the early days we all used to jump in the back of a Transit van and that was that. When we recorded our album Ummagumma in 1969, we had amassed so much kit that we decided to photograph it all in front of our van, which was still pretty modest by our latter day standards!

“By the time Dark Side of the Moon was released in 1973, we had nine tons of kit which required three trucks to move it. But the real change came when we started to use multiple stages while touring. We would take three complete stage sets with us and these would leapfrog venues, allowing us to perform at more locations in a shorter space of time.

“We ended up with no fewer than 23 trucks on tour. The logistics were so complicated that not only did we have band rehearsals, we also had to have packing rehearsals so the roadies knew what to put where in order that everything would turn up in the right place at the right time!”

A saucer full of Scanias: As our photo on the high speed bowl at Millbrook Proving Ground shows, there is a connection between Grampian Continental and Essex International, whose livery the LB141 sports. “It’s a long story,” says Bim Mountain. “Basically it’s down to my nephew Michael Lacey Junior, whose father used to drive for Essex International back in the 1970s. Michael used to go out with him and developed a passion to have an LB 141 in Essex International colours. Today he’s involved in Grampian Continental, which explains the similar liveries. Having achieved his dream, Michael recently sold the LB 141 on to Scania dealer Keltruck, but decided to keep his vintage tilt trailer.

A nice pair: Nick Mason surveys the LB141 and the R 730 from a lofty perch above the Millbrook test track. We’re now looking forward to bringing you a feature on Nick’s own collection of outstanding vehicles in a future edition of Scene Scania 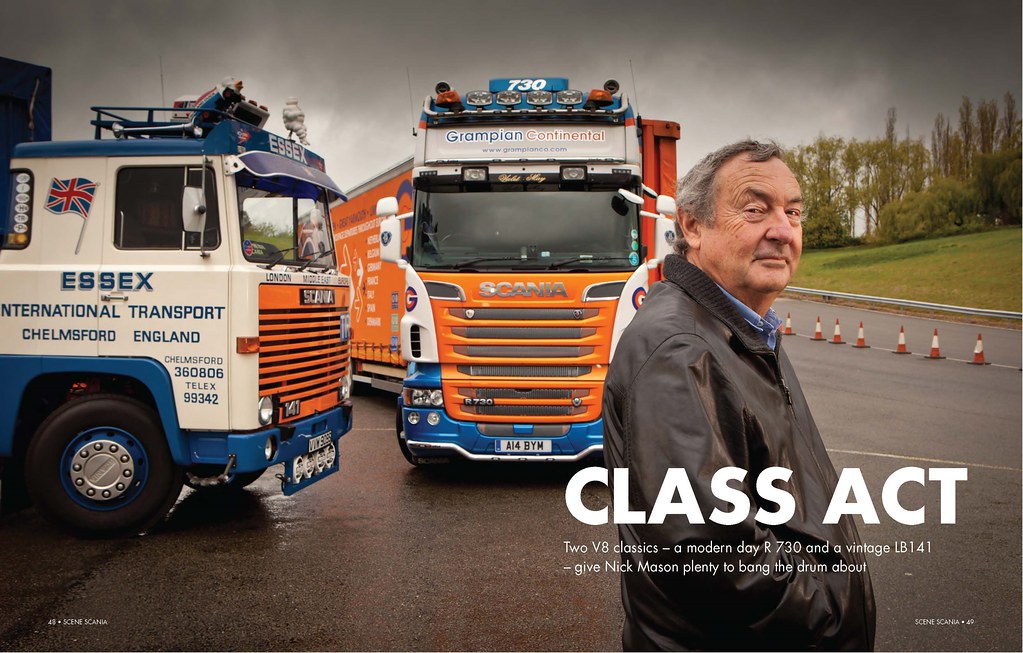